Apple surpassed the $2 trillion mark on Wednesday. Apple’s stock price briefly rose to $467.77. With these record numbers, Apple became the first company to cross this milestone.

Despite the ongoing pandemic, the year for the company can clearly be called a successful one. After a 15% decline in iPhone sales during the 2019 New Year holidays, the company was able to get out of the crisis a little bit. 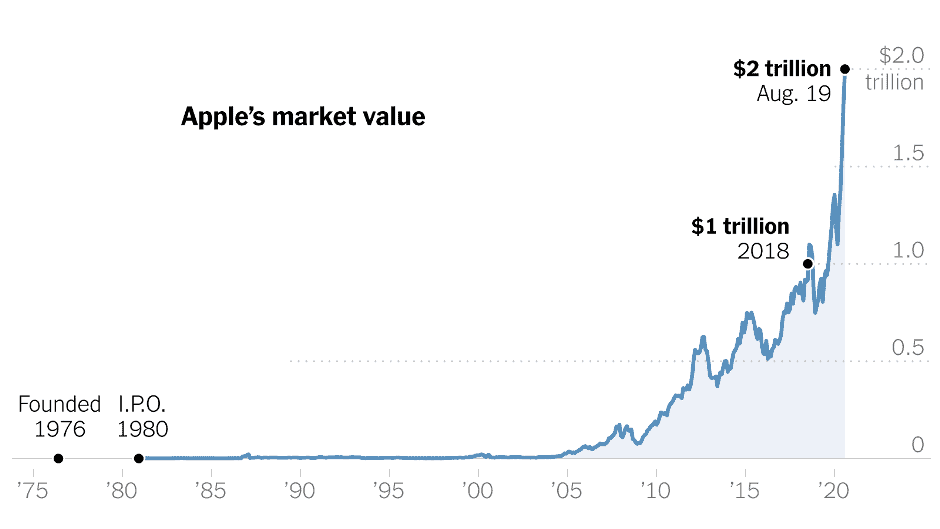 In July, the company reported a well-closed second quarter with $59.7 billion in revenues and strong growth in product and service sales. Apple attributed the strong performance to customers moving to work from home and the associated high online store sales. The company also quickly adapted to online sales when it had to close outlets.

By the way, Apple also became the first American company to surpass the $1 trillion market mark in 2018. It took only two years to double its value. To date, the company’s shares are up 60%. Interestingly, investors no longer see Apple as a device manufacturer, but rather as a software company.

iPhone 11 is the top-selling smartphone in several markets

When Apple reported its results for the second quarter of this year, the company said the iPhone 11 is the best-selling smartphone in the China market. The latest Counterpoint survey confirms this.

Counterpoint data indicates that the top five best-selling smartphones in the Chinese market in the second quarter of this year included the iPhone 11, Oppo A8, Honor 9X, Vivo Y3 and Huawei Mate 30 5G. At the same time, the iPhone 11 and Huawei Mate 30 are premium flagship phones, while the other three models belong to the budget segment.

The new iPhone 12 smartphones are expected to offer users 5G support this year. And the smallest 5.4-inch model will be quite functional and accessible to a wide audience.