Back in May, Oppo’s sub-brand Realme forayed into the smart wearable space with its first-ever Realme Watch. Since then we’ve been hearing about the Watch S Pro from numerous reports and sources. The wearable appeared on numerous certifications that eventually revealed key specs along the way. While we still don’t know when the S Pro will go official, we now surely have some information on the regular S version. Yes! you heard it right. It looks like Realme Watch S might arrive in two versions – Regular and Pro.

Realme Pakistan has recently posted about Realme Watch S on its official Twitter account. The post clearly talks about the launch date of the wearable. The smartwatch will see its official unveiling on November 2. In the post, you can also see the very first teaser image attached that reveals design, strap options, watch faces and of course, key specs and features. 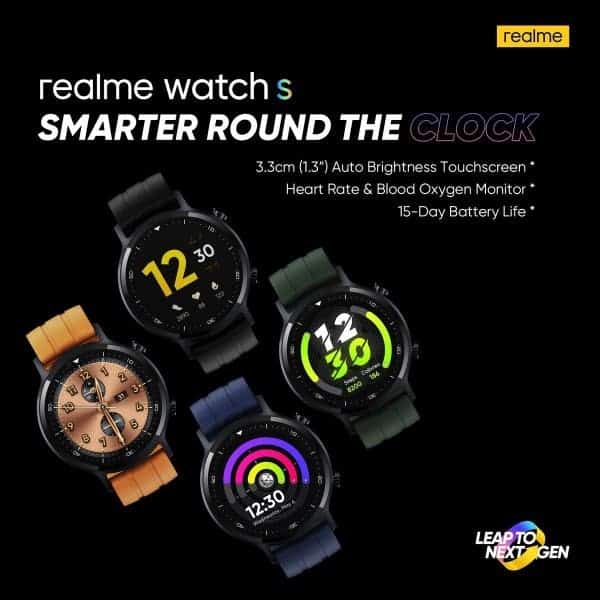 As you can see in the above image, Realme Watch S will indeed feature multiple watch faces and have will have a bunch strap options such as black, blue, green and more. Coming to the key specs, the wearable will feature a 1.3-inch circular touchscreen display panel. The smartwatch will also come with heart rate sensor and blood oxygen monitor. The latter is something that we are seeing a lot in wearables launching this year.

In terms of fitness, the wearable will arrive with a 16 sports modes allowing you to choose from numerous activities and excercises. Laslty, it will offer a solid 15 days of battery life but that of course will be in power saving or some similar mode. While we now know a lot about the Watch S wearable, we’re expecting more information to surface on the web as we will get close to the official launch.

As mentioned earlier, the wearable will see its official unveiling on November 2. The entire launch eventg will be livestreamed on company’s social media paltforms. Coming to the pricing, there is no concerete information at the time of writing this. The original Realme Watch arrived with a price tag of $52 making it a very affordable option. We’re expecting the same from the upcoming Realme Watch S meaning the pricing should fall somewhere below the $100.

Next Galaxy S20 might soon get the stable Android 11, WiFi Alliance listing suggests!