Earlier this week, Qualcomm officially released its latest flagship SoC, Snapdragon 888. There are also reports that the company will release mid-to-high-end chips. Although reports claim that these chips will be in the Snapdragon 7xx series, there are no official details of these processors. According to @DigitalChatStation, the new Snapdragon 700 series chipset will arrive in the first quarter of 2021 (Q1 2021). 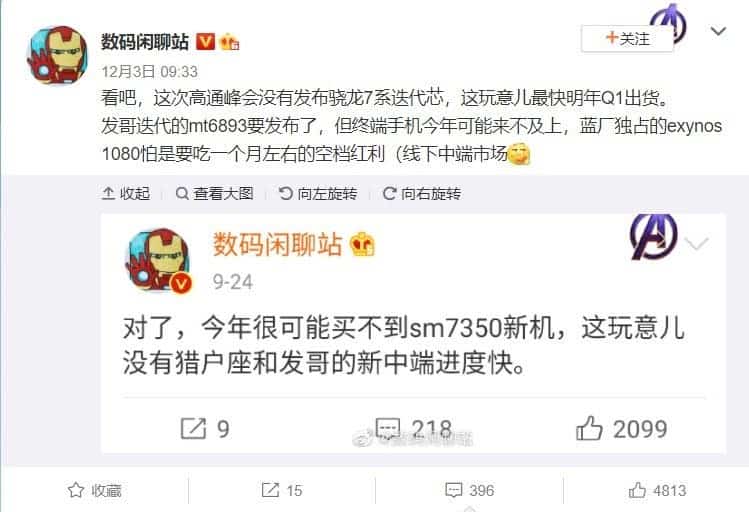 Qualcomm’s new 7-series chipset may be the main competitor of the 5nm Exynos 1080  and MediaTek’s MT6893 platform. The latter is an unannounced 6nm mid-to-high-end chip. However, the Exynos 1080 and MT6893 should beat this Snapdragon chip in performance.

As of now, there is little information about the new Snapdragon 7 series processors. We don’t know anything about them except for the model SM7350 and the code name Cedros. Cedros is named after an island off the coast of Mexico. Qualcomm’s headquarters in San Diego is relatively close.

The prototype of this platform scored more than 530,000 points on AnTuTu, which means that its performance will be much better than that of Snapdragon 765G, but it is still not as good as last year’s flagship Snapdragon 865. The SD865 on the same benchmark platform easily exceeds 600,000 points.

According to a Geekbench test, this chip has 8 cores. However, we do not know much about this chip for now. According to recent reports, MediaTek announced last week that it will release a 5G chip with a 6nm process technology. The model of this 5G chip is MT689X (the last digit is not yet clear). This chip adopts ARM Cortex-A78 core design, the highest frequency of the main core is 3.0GHz, and it will be manufactured by TSMC 6nm. The CPU frequency and architecture of MT689X are the same as Samsung Exynos 1080.

We can see that MediaTek is really doing all it can to catch up with Qualcomm. Although it is not yet at Qualcomm’s level, it appears to be closing the gap with the advent of 5G. In the flagship segment, MediaTek used to be nowhere near Qualcomm. This is not the case presently.