While there are folks that have the money to buy brand new smartphones from the shelf, we must acknowledge that there are millions of people who do not have the money to buy new smartphones. In fact, some people need flagship phones for mid-range prices or mid-range phones for entry-level prices. One way to make this happen is to buy used devices. This means that you will not be the first person to use the unit you are getting out-of-the-box. The global used smartphone shipment is quite massive.

IDC stated that the sales of used smartphones in 2020 were lower than expected. However, looking at the smartphone market generally, the second-hand market still performed well. Due to the impact of the coronavirus pandemic, IDC predicts that the new mobile phone market will decline by 6.4% in 2020.

IDC said that most of the expected growth of second-hand smartphones is driven by the fact that the old-for-new policy of mobile phone manufacturers is pushing more and more consumers to use old phones to offset the cost of expensive new phones.

The global smartphone market is a very competitive one as manufacturers jostle for supremacy in their stronghold markets. The year has just begun but analysts are already predicting what the market will look like. According to TrendForce, smartphone production will reach 1.36 billion units in 2021. This will represent a year-on-year increase of 9%. The agency also predicts that the total global 5G smartphone production in 2021 will be about 500 million. Also, the 5G penetration rate will rapidly increase to 37%. 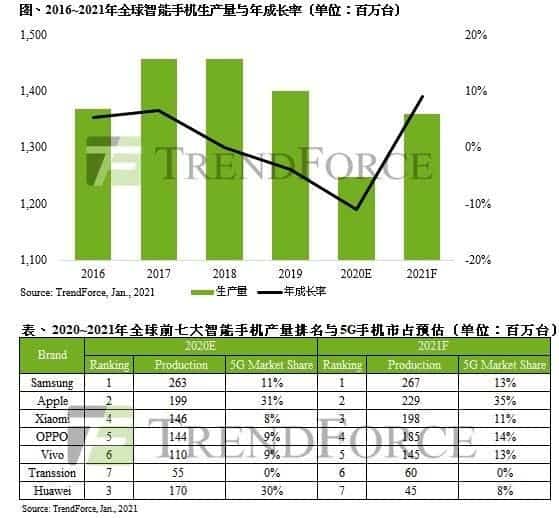 According to TrendForce, the global smartphone market in 2020 was hit by public health incidents. The total annual production volume was only 1.25 billion units, a year-on-year decrease of 11%. This is the largest decline in history. The top six brands in the world are Samsung, Apple, Huawei, Xiaomi, OPPO, and Vivo.

Looking forward to 2021, the expectations are that the global smartphone industry will bounce back big. Considering replacements, demand, and the support of emerging markets, estimates are that the total annual production will reach 1.36 billion units. Looking at the current situation, TrendForce estimates that the top seven global seats in 2021 will be Samsung, Apple, Xiaomi, OPPO, Vivo, Transsion, and Huawei. The top six will cover nearly 80% of the global market. However, there is still an uncertainty considering the fact that the pandemic is not entirely over.

TrendForce estimates that the total global 5G smartphone production in 2021 will be about 500 million, and the penetration rate will rapidly increase to 37%. However, the production performance will still be limited by the shortage of foundry capacity.

Next Xiaomi Mi 11 can connect to two Bluetooth headsets simultaneously