It’s only a few days before the official launch of Honor’s first smartphone as an independent brand. The Chinese manufacturer will release the Honor V40 at a press conference in China on January 18th. There have been a series of speculations regarding this device. Many weeks ago, there were reports that the Honor V40 will use a 300Hz touch sampling rate display. The company has officially confirmed this feature via a recent Weibo post. 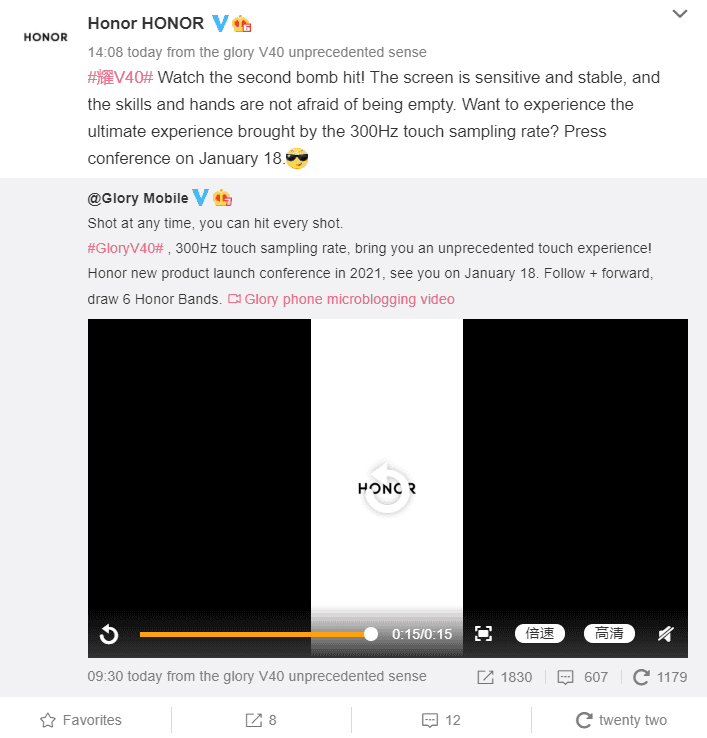 In a teaser yesterday, Honor also confirmed that its upcoming smartphone will arrive with a 1 billion color retina-level super-sensing screen. According to reports, the 300Hz high-brush flexible ultra-clear screen of the Honor V40 has links to Huawei. There are reports that the display should use the same 10-bit panel as the Huawei nova 8 Pro. In terms of refresh rate, we expect the display to support 120Hz. It will also come with a pixel resolution of 2676 x 1236 and 800 nit global peak brightness.

On December 31st, a new Honor model, Honor YOK-AN10 (Honor V40), successfully passed the Rheinland’s safe fast-charging certification. The certificate shows that Honor V40 will support wireless fast charging up to 50W. The Rheinland certification is the latest listing for the Honor V40 as its official launch draws closer.

According to a new offline poster that appeared on Weibo, the Honor V40 has commenced pre-sale. From the poster, we can see that the display of this phone has a large and attractive curvature. The poster also shows that pre-sale is active on all major offline stores.

The HonorV40 recently passed through TENAA and got a couple of other certifications. This raised speculations that the smartphone will launch soon. According to the network access certification, the Honor V40 comes with a standard Huawei HW-110600C0x charger. The charger supports up to 66W charge pump fast charging. In addition, this smartphone runs on the Android system but there is no confirmation if it supports GMS.