The new generation of Reno6 series smartphone has recently appeared on the Ministry of Industry and Information Technology and the 3C certification websites. The new phone has a model PENM00. And though it doesn’t mean the phone will be called the OPPO Reno6, all previous leaks and official news hints this is our protagonist.

Interestingly, a mysterious OPPO phone with the model PENM00 had already appeared on the GeekBench benchmarking website. The latter discloses some key features of the upcoming handset.

From the GeekBench screenshot, we learn that the chipset code-named “Kona” comes with the Qualcomm Snapdragon 870. In fact, the screenshot doesn’t prove that we are dealing with this chip, but the parameters of the tested machine are identical with the Snapdragon 870. Say, it has a quad-core 1.80GHz + triple-core 2.42 GHz + super-large core 3.19 GHz architecture. Also, in GeekBench 5.3.2, it scored measured a single-core 1010 points, Multi-core 3115 points, 12GB storage, running Android 11 system. 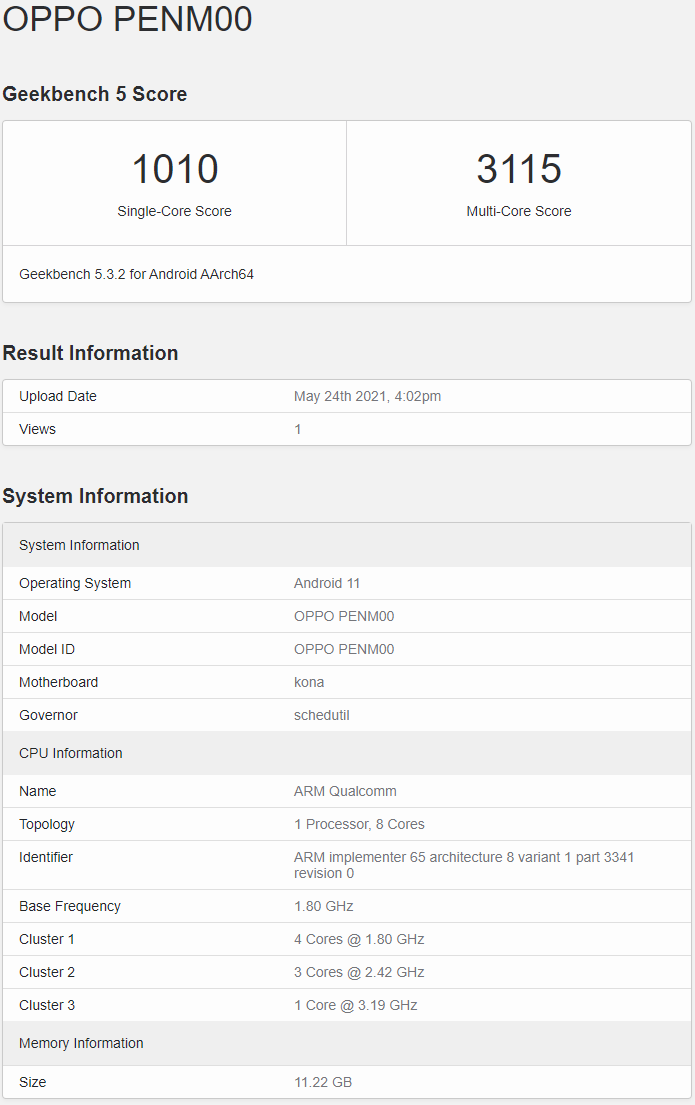 According to TENAA, the two new models of the OPPO Reno6 series use 6.55-inch 2400*1080p resolution OLED screens. Also, they support 90Hz refresh rate and adopt a single-hole curved screen design. Under the hood, they host a built-in 4500mAh battery, which supports 65W fast charging. The thickness is 7.6mm/7.99mm.

Among them, OPPO Reno6 Pro will come with the Dimensity 1200 processor, while the OPPO Reno6 Pro+ uses a Snapdragon 870 chip.  and OPPO Reno6 is expected to debut Dimensity 900 processor. The latter uses TSMC’s 6nm process and an octa-core CPU architecture. It includes 2 Arm Cortex-A78 cores at 2.4GHz and 6 Arm Cortex-A55 high-efficiency cores at 2.0GHz. The rest of the parameters include a L3 cache 2MB, a 4-core Mali-G68 GPU that brings excellent performance enhancement and rapid experience to high-end 5G mobile terminals, an integrated 5G modem and Wi-Fi 6 support.

Next Android smartphone performance can be updated using Google Play