Many know Samsung due to its S and A series smartphones. The former includes mainly flagship products, while the latter offers budget models. But there are other lines as well. Say, there are F series that has quite attractive models as well. And we are talking about this, because the South Korean company is going to release a new model from this lineup. Recently, the upcoming Samsung Galaxy F 42 5G smartphone has appeared on GeekBench. Besides the worthy information we get from the screenshot, this also indicates that the phone is on the way and will hit the market in the near future.

The alleged Samsung Galaxy F42 5G in the GeekBench screenshot has a mode name SM-E426B. The latter has a MediaTek chip with a model number MT6833V/NZA. But if these numbers don’t say you anything interesting, then we can interpret it in this way – the Samsung Galaxy F42 will be powered by the Dimensity 700 chip. 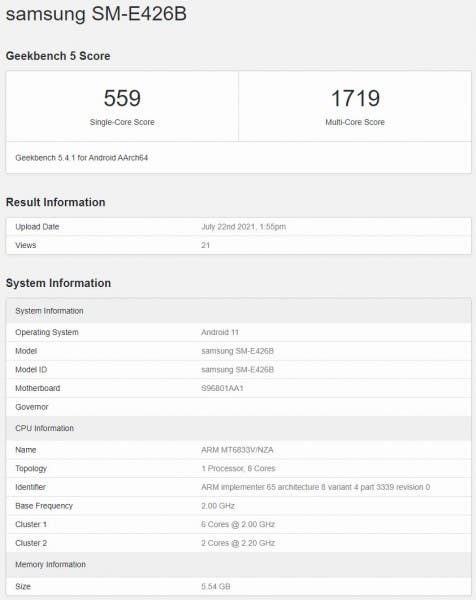 Well, the listing also displays that the phone will have a 6GB RAM and run Android 11 out of the box.

As for the benchmark test results, our protagonist scores 559 points and 1719 points in the single-core and multi-core tests, respectively.

However, this is not the first leak of the phone. Prior to this, the Samsung Galaxy F42 has spotted in certification sites such as Wi-Fi Alliance, Bluetooth SIG, and the Bureau of Indian Standards (BIS).

Generally talking, Samsung’s F line models are just rebranded variants of the also-launched A and M series handsets. Say, there is the Galaxy A22 5G with the Dimensity 700 chip. And as it is the only Samsung phone with this chip, there is every reason to think that the upcoming Samsung Galaxy F42. In this sense, we can recall the key features of the A22 because most likely they will appear on the F42 as well.

The Samsung Galaxy A22 5G sports a 6.6-inch IPS LCD panel with a Full HD+ resolution. The Dimensity 700 chip inside is paired with up to 8GB of RAM and up to 128GB of internal storage. Inside, it also carries a 5,000mAh battery which supports 15W charging.

On the photography side, the Galaxy A22 features an 8MP front camera, while the rear camera includes a 48MP main sensor, a 5MP ultra-wide shooter, and a 2MP depth sensor. You’ll also get a side-mounted fingerprint scanner for biometric authentication.