In October last year, a presentation of the popular Redmi Note 11 line was held in China, and since then, the company’s fans in the global market have been wondering when the new devices will go beyond the Middle Kingdom. And yesterday we got the answer to this question. The company has officially announced that it will be launching the Redmi Note 11 series globally on January 26.

However, it did not specify the composition of the participants in the event. It seems that in addition to the Redmi Note 11 series devices themselves, Xiaomi will arrange a global release of the MIUI 13 proprietary user interface. In favor of this development is the teaser of the company, which is published on its MIUI page on Twitter. It says that “the time has come” and “something wonderful” is coming. It mentions MIUI 13.

Also, we expect that in addition to announcing the innovations and changes that the new version of the proprietary interface brings with it; the company will announce which devices in the global market it will update to MIUI 13. Initially, the beta testing process will start and the flagships will be the first to join it; and then every other Xiaomi model released in the last two years.

According to rumors, devices released in 2021 will receive MIUI 13 by the end of the first quarter of this year. As a probable time for the release of updates, we expect February-March is. During the announcement of MIUI 13, the company did not announce the list of all models that could qualify for the new firmware version. 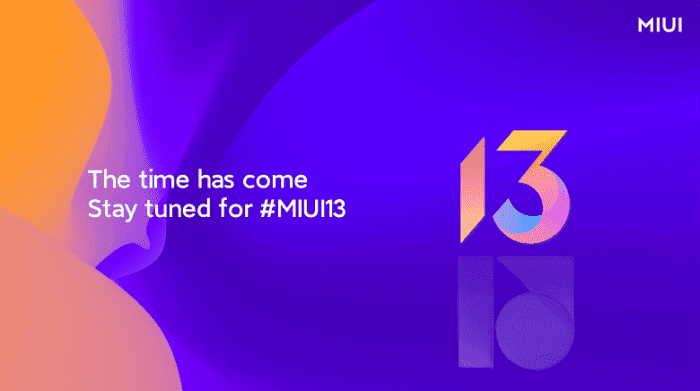 Vice President Chang Cheng said that the new firmware will bring with it many changes. He did not specify what kind of innovations and changes would take place. It was only promised that the speed of system applications was increased by 20-26%; compared to MIUI 12.5 Enhanced Edition and other programs – by 15-52%.

For his part, the head of the company Lei Jun conducted a survey on his Weibo page; asking users to name those aspects that should improve in MIUI 13. It is quite predictable that many spoke in favor of “smoothness, no freezes”. This indicator for many turned out to be more important than the speed of fixing bugs, comfortable interaction, expanding functionality and an increased level of privacy and security. These are just some of the features that will come with the new user interface.

Next Redmi K50 promises the best vibration among Android smartphones