The upcoming Xiaomi 12 Pro smartphone’s global variant has appeared on the Geekbench benchmarking website and HTML5Test database. Back in December 2021, the Chinese smartphone manufacturer launched the 12-series smartphones in its home country. Now, Xiaomi is gearing up for the Xiaomi 12 series’ impending global launch. Past leaks suggest that the Xiaomi 12 will launch globally either in February or March.

The Xiaomi 12 Pro smartphone has passed through the Geekbench benchmarking website, carrying model number 2201122G. As expected, the Geekbench listing sheds light on the phone’s key specifications. First off, it claims that the handset will boot the latest Android 12 OS out of the box. It also suggests that the operating system will have a layer of MIUI 13 on top. Furthermore, the listing confirms that the handset will pack a powerful Snapdragon 8 Gen 1 SoC under the hood. This processor’s clock speed will be up to 3GHz. 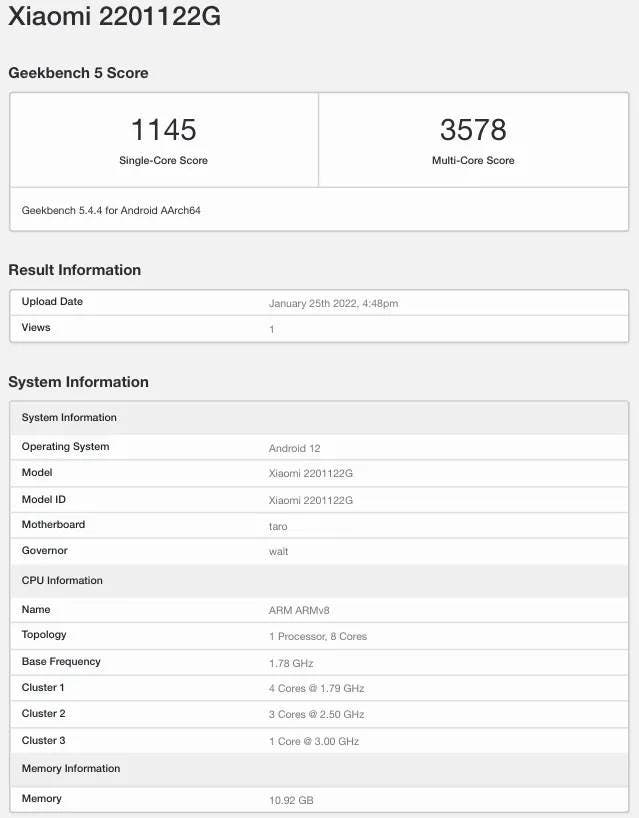 Moreover, the Xiaomi 12 Pro smartphone will ship with 12GB RAM. However, Xiaomi could introduce an 8GB RAM variant at launch. The phone secured 1145 and 3578 in Geekbench’s single-core and multi-core tests.

Aside from that, the Xiaomi 12 Pro has appeared on HTML 5 carrying the aforesaid model number. The listing confirms that the phone will boot Android 12 OS. Also, it scored 474 points out of 555 on HTML 5.

As mentioned, the Xiaomi 12 Pro is currently available in China, where it comes with a 6.73-inch E5 AMOLED display. This mammoth screen delivers a 2K+ resolution, coupled with HDR10+ and 1500nits brightness. Aside from that, the display carries a Dolby Vision certification. Furthermore, the phone’s LTPO 2.0 panel enables toggling between 1Hz and 120Hz. The side of the display has a slight curve. Also, it sports a hole-punch cutout at the top center for the front camera. Moreover, the handset is powered by a Snapdragon 8 Gen 1 SoC processor.

Aside from that, the 12 Pro ships with up to 12GB of RAM and offers 256GB of onboard storage capacity. For optics, the phone houses a 50MP Sony IMX 707 main camera with OIS at the back. In addition to that, the rear-mounted camera island features a 50MP telephoto camera and a 50MP Ultra-Wide angle sensor with 115-degree FoV. Upfront, the phone has a 32MP shooter for capturing selfies and video calling. Moreover, the device draws its juices from a 4,600mAh battery that supports 10W reverse wireless charging, 50W wireless charging, and an impressive 120W wired fast charging.

Xiaomi 12 Pro Could Arrive In India In April 2022, Here Are Its Specs