One of the most-anticipated gaming smartphones, the Red Magic 7 will be unleashed on February 17. Prior to this, we have heard that our protagonist will have at least two versions – the vanilla version and the Pro version. But recently, we have also seen the transparent variant as well. Today, the company officially talked about it.

The phone has passed through the TENAA certification. So we can have a look at its design. From the latter, we see that the Red Magic 7 Translucent Edition uses a vertical arrangement of three camera sensors on the back. The camera module is placed in the upper central area. On both sides of it, we can see transparent parts. 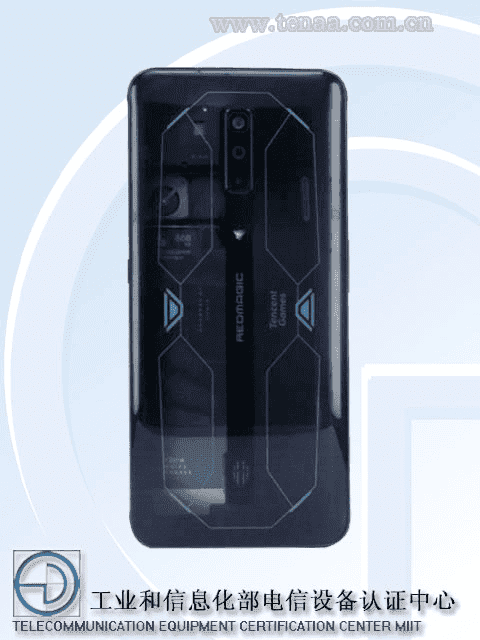 To date, we believed that the handset will support 165W fast charging. But this is not about this model. (Maybe the Pro variant will become the fastest-charging smartphone on the globe). As for this phone, it will support 135W fast charging and come with a large 5000mAh battery. (The Pro version is rumored to have a 4500mAh battery. So thanks to the mentioned charging power, it will be fully charged in less than 10 minutes.)

We know that the Red Magic 7 gaming smartphone will sport the Snapdragon 8 Gen 1 and up to 18GB RAM. Thanks to various optimizations, the phone’s AnTuTu score reached 1,101,769 points. When talking about optimizations, we first mean heat dissipation. Our protagonist will continue to use a built-in turbo cooling fan. The active cooling fan will have 20,000 rpm. Also, it will boast a 41279mm2 large heat dissipation area soaking plate.

Apart from the aforementioned features, the Red Magic 7 will also feature a 6.8-inch OLED screen, which will continue to have a refresh rate of 165Hz.

The information that comes our way from the Ministry of Industry and Information Technology reads that the Red Magic 7 will offer 3 colors of the green, black, and red and blue gradient. The phone will support off-screen fingerprint recognition. The machine has a body size of 170.57×78.33×9.5mm, weighs 215g.

Lastly, the global version of the Nubia Red Magic 7 will come with an in-screen camera. As you should be aware, the world’s first under-screen smartphone was the ZTE Axon 20. Last year, the manufacturer launched the ZTE Axon 30. Apart from these two, there is also the Xiaomi MIX 4.