Twitter officially announced that the iOS version of the client now supports direct recording of GIF images. iPhone users can better display images without using other tools. Users only need to select a GIF before recording when sending a tweet. They can directly make a GIF and send it. Users can also search the web for GIFs and use them for free. Twitter has also conducted a number of tests before, including video double speed, automatic subtitle addition to videos, etc. Automatic subtitles will be available in more than 30 languages, including English, Chinese, Hindi, Spanish, Japanese, and more. Subtitles will be displayed in the original language the video was uploaded in. As of now, there is currently no option to translate subtitles. 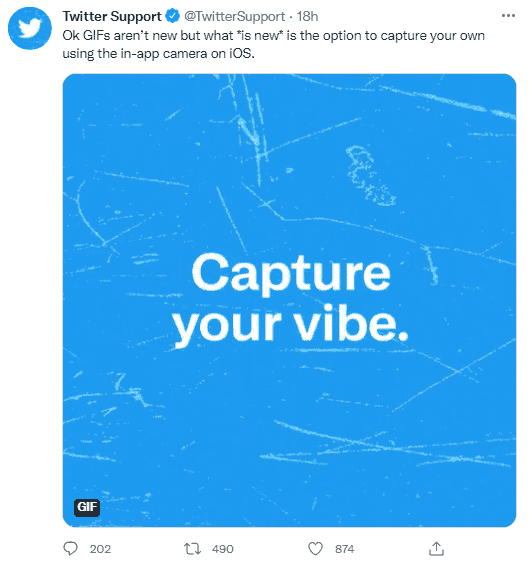 According to Twitter, there is nothing new about GIFs. However, what is new is that iOS users can now capture their own GIFs using the in-app camera. This feature will be a good addition for folks who make a lot of GIFs. Before now, users will have to rely on third-party applications to make GIFs. However, the new addition makes the entire process much easier for users. However, iOS users may have to update their Twitter application to the latest version to get access to this feature.

Ok GIFs aren’t new but what *is new* is the option to capture your own using the in-app camera on iOS. pic.twitter.com/3Hl6q78e6s

A few days ago, Twitter said it will launch a new feature called Twitter Shops. This new feature will allow businesses to display up to 50 products on their web pages. It is part of Twitter’s push to grab a piece of the $45 billion US social commerce market. Facebook and Instagram are leaders in social commerce, where merchants can open virtual stores and sell goods. This will increase the competition in the market.

Previous ZTE wins! Probation ends as US Judges rules in favor of the Chinese brand