Oppo has recently launched its Oppo K10 series in China and is about to introduce a new variant dubbed Oppo K10x. At the same time, the company is moving on to prepare the Oppo Reno 8 series for its probable release in June or July 2022. Meanwhile, the company is working with a device that still has its identity under the wraps. This could end up being part of the upcoming Oppo Reno 8 series, but as of now, only carries the Oppo PFZM10 moniker. The device is gearing to be a cost-effective flagship smartphone with the excellent and recently-released Dimensity 8100 SoC. The device has just passed through the Geekbench database confirming some of its key specifications.

A new Oppo smartphone with a PFZM10 model number has passed through the Geelbench realms. The device had some of its key specifications confirmed, but the icing on the cake certainly is the MediaTek Dimensity 8100 processor. To those unaware, this recently-released MediaTek chipset boasts a 5 nm TSMC manufacturing process and brings compelling specs such as four ARM Cortex-A78 big cores at up to 2.8 GHz. This processor has been conquering Android OEMs, and its adoption is growing exponentially. In fact, we assume that MediaTek is currently selling more of these than Dimensity 9000 SoCs. But this is expected, after all, the market is dominated by mid-range phones and the expensive flagship segment isn’t for everyone. 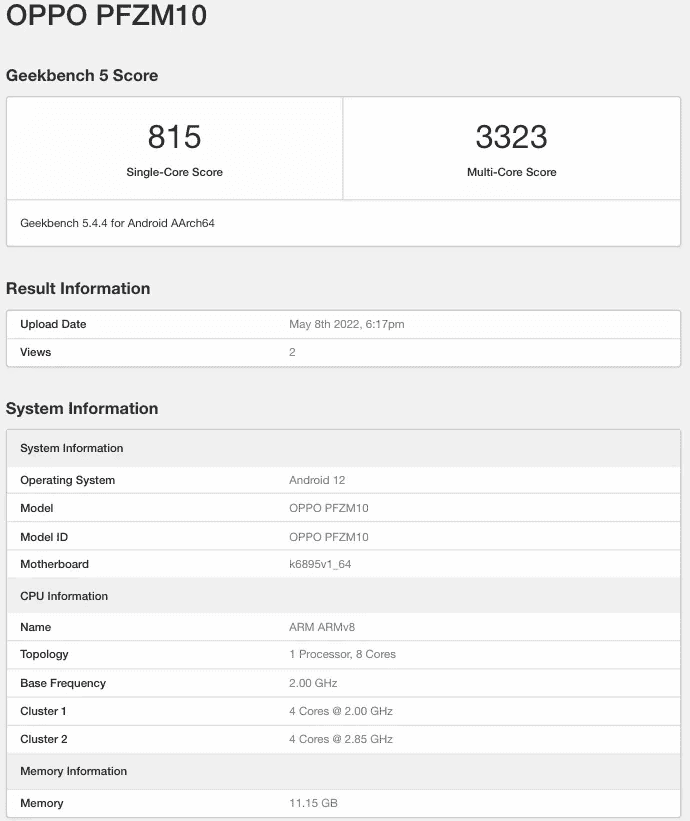 This chipset achieves 813 points in the Single-Core score and 3,323 in the Multi-Core department. The Dimensity 8100 is an Octa-Core processor that features premium ARM Cortex-A78 cores with a clock speed of up to 2.85 GHz and four ARM Cortex-A55 cores clocked at up to 2 GHz. The chipset also brings a Mali G610 GPU that handles graphics without much issue. Furthermore, the chipset has MediaTek’s HyperEngine 5.0 to boost gaming performance. Allegedly, the chip can handle up to 170 fps gaming. However, we don think there is any game offering this right now. Speculation says that this could end up being the MediaTek Dimensity 8100 MAX. This is a tweaked version of the chip found within the OnePlus Ace and OnePlus 10R. These companies can share these tweaks without much hassle.

The listing also confirms a 12 GB of RAM, but we expect other variants to come as well. The device also runs Android 12 straight out of the box which means ColorOS 12 running on the top. As we said before, it’s hard to determine from which lineup this device comes. But we’re honestly assuming it’s an Oppo Reno 8 variant. After all, the Dimensity 8100 MAX won’t come in a simple smartphone without the buzz.

Worth noting, that the Oppo Reno 8 Lite, one of the variants in this family, had specs and design details revealed.

Next New US & European regulations will affect the semiconductor industry