Chinese manufacturer, Honor, is currently working on its new flagship series. We are already having the first set of information regarding this new upcoming series. According to popular Weibo tech blogger, @DCS, the company will release the Honor 70 series later this month. The blogger also claims that this series will launch the Sony IMX8 series super-bottom CMOS sensor. According to reports, the Sony IMX800 sensor is customized by Honor and Sony. 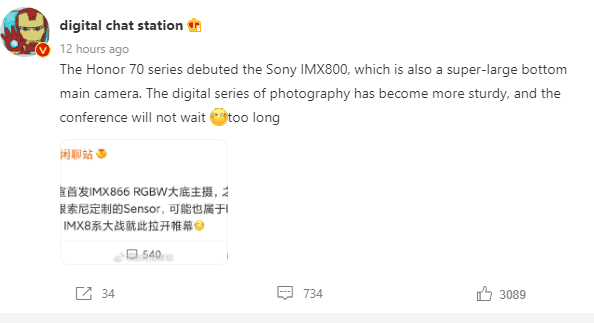 Honor 70 will use a BOE drill-like screen, and also comes with Honor’s first 1920Hz high-frequency PWM dimming technology. This device will support 66W fast charge as well as a 4800 mAh battery.

The Honor 70 Pro will also sport the BOE drill-like screen, LTPO material, and support 1-120Hz adaptive refresh rate. Compared with the standard 120Hz high refresh rate, it is more power-efficient to use. This is also an upgrade from the Honor 70. In terms of charging specifications, this device will be consistent with the Honor 70. This smartphone will come with a triple rear camera setup. It will have a 50 MP (Sony IMX766) + 50 MP (ultra-wide) + 8 MP (telephoto) cameras.

The screen specifications of the Honor 70 Pro+ are the same as those of the Honor 70 Pro. However, it upgrades the fast charging speed to 100W. Furthermore, this device will also support high-power wireless charging. This device will come with a 4600 mAh battery. In the camera department, it will use a 50 MP (Sony IMX766) + 50 MP (ultra-wide) + 12 MP (telephoto lens). One of the main features of the camera will be the presence of an optical image stabilization system. There will also be NFC, stereo speakers and a linear vibration motor.

In addition, the linear motor will also become the standard configuration of the Honor digital series. The Honor 70 uses a Z-axis vertical linear motor, while the other two use an X-axis horizontal linear motor.

According to the roadmap announced earlier, the flagships of the Magic3 series will be the first to receive the final version of Magic UI 6.0. Before the end of this quarter, it will be available for Honor 60 and Honor 50; and other devices of the company, including Honor X30, Honor V40 and Honor V7 tablet, will receive the final Magic UI 6.0 in the third quarter of this year. However, we will keep you updated on this regard as soon as possible.