The next week will be quite hectic for Apple enthusiasts. The Cupertino-based firm will finally introduce its new iPhone 14 series with four models, and the new Apple Watch Series 8. Besides the regular watches, we will also see the release of a rumored Apple Watch Pro. This new watch will carry a more durable build, almost a “rugged” watch. The wearable is rumored to pack sapphire glass, a large display of 1.99-inch, and a new kind of titanium as the main material. The wearable will also be the largest in the Watch series with a 47 mm case. According to a new report, the watch will not be compatible with old Apple Watch series bands.

The new Apple Watch Pro will likely pack a wider band. According to Bloomberg’s Mark Gurman, the smartwatch will likely need another kind of band to look fancy. The fact is that the older Watch bands may still fit the wearable. However, they will look like something is “off”. You probably won’t enjoy the final look of the new Apple Watch Pro with bands that does not seem to be made with its design in mind. Therefore, we expect a set of new bands to be sold for this particular model. That means that Apple, and third-party band makers will soon be selling bands with the Apple Watch Pro design in mind

As per Gurman reports, the new Apple Watch Pro will have a shatter-proof display. The panel will likely use sapphire glass since it’s almost indestructible. It’s crazily expensive for a smartphone, but on a tiny watch, it may fit Apple stipulated manufacturing costs. Moving on, the casing will be made of a new kind of durable titanium. The Watch will perfectly fit those who need a rugged watch. According to render from TheAppleHub, the new wearable will have flat sides and a flat display that will look considerably different in comparison to the Apple Watch Series. 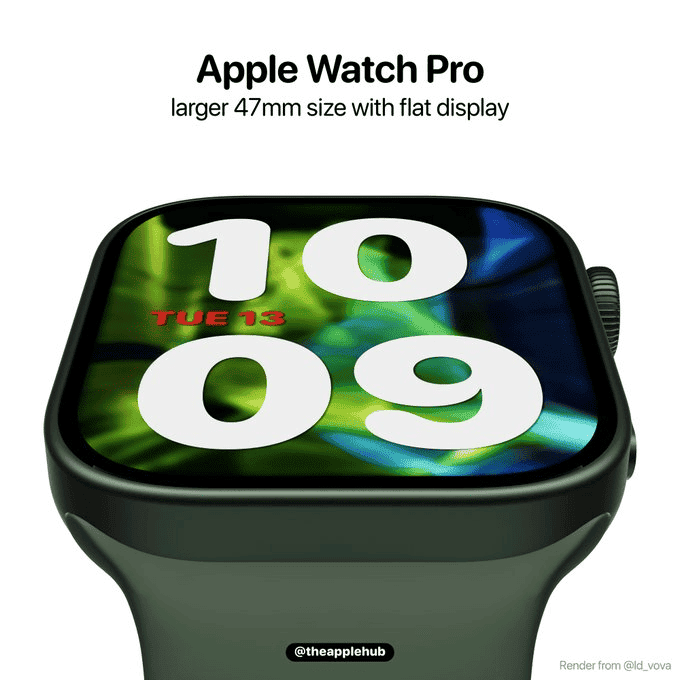 The Apple Watch Pro will also pack a large battery and come with a body-temperature sensor.