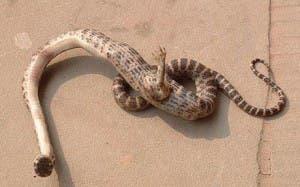 For this years Halloween we’ve covered UFO sightings in Hangzhou, Ghost in car parks and Yeti’s who steal beer!

Now, how about a talon clad, one leg wielding snake that climbs your bedroom wall in the middle of the night!
This zoological mystery was discovered in Sept. 2009 by a 66 year old Chinese lady. She told reporters at the time she awoke late one night to a strange scratching sound and

‘found this monster working its way along the wall using his claw’.
Monster might be too strong a description for a 16 inch long snake about as thick as a little finger.

Upon finding this very rare specimen the shocked lady did what any of us would have upon finding a rare and helpless animal in their room. She beat it to death with a shoe and stuck it in a bottle of alcohol.
More weird, spooky and vaguely Halloween related news tomorrow.

Scientist studying the specimen noted that snakes with mutations aren’t rare. The most common being snakes with 2 heads, but to find a snake with a leg is extremely odd!

Next iPhones Give You Piles!

Get creative for Halloween with Creality CR-Laser Falcon 10W