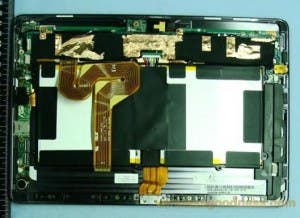 The Transformer Prime is becoming quite the regular on Gizchina. This time the Asus netbook/Android tablet has been spotted in the nude as the FCC gave the latest in the Eee Pad line up a good going over.

Model number TF201, Transformer Prime to the rest of us has already been given the FCC’s stamp of approval for Wi-Fi and Bluetooth, but is still waiting on it’s 3G ok.

On show at the FCC filling was the inside of the Transformer Prime we can see the shielding covering the NVIDIA quad-core Kal-el CPU, monster 10 hour battery and also NAND memory from Hynix alongside SDRAM provided by Elpida.

While the Prime has a fantastic name, and an awesome looking body, does the Kal-El chipset and long lasting battery make the Asus Eee Pad Transformer Prime the Android tablet to have?