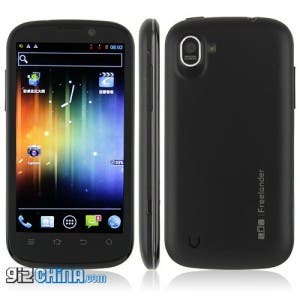 This if the first time the Freelander L10 has appeared on Gizchina, and I’m really surprised as to why I haven’t written about this $185 phone before as it looks every bit as good as the JiaYu G3 only it’s already on sale!

Why the Freelander L10?

Like so many of these phones the Freelander L10 has a dual-core MT6577 CPU, 1GB RAM and 4GB ROM which offers plenty of performance and the is an SD card reader if you need to add some extra storage.
The screen on the Freelander L10 is a 4.3inch IPS model with a resolution of 960 x 540, and sitting above that is a front 0.3 MP camera.

Around the back is a rear 8 mega-pixel camera with auto-focus and LED Flash.

As you would expect from any Android phone regardless of the brand the L10 also has GPS, Wi-Fi, Bluetooth and sports Android 4.0 ICS OS.

The Freelander L10 looks like a great phone on paper but it’s not exactly the most ‘wow’ phone in the world (I prefer the UMi and JiaYu).

So that’s my list some of you are going to agree while other will have wanted to see other phones included, if you have any suggestions as to what phones you would have included in your top 10 Chinese phones let us know in the comments below!