The nice guys over at Umeox sent us photos of a 5-inch, quad-core phone they have on show at the Mobile World Congress. That’s all well and good, but we’re more interested in the 1080HD version due in May!

The photos here were kindly sent to us by Umeox directly from MWC in Barcelona, and show the company’s new 5-inch, quad-core Android smartphone. A name wasn’t supplied, but what we do know is that the model in the photos uses a MT6589 quad-core chip, 5-inch 720 display, 3 mega-pixel front camera and 8 mega-pixel rear, plus a 2500mAh battery.

We assume this is going to be their entry-level 5-inch phablet as we have been told that a full HD version is due in May.

Don’t despair though as you won’t need to wait until May to get the juicy details! We have been doing a little digging, and have uncovered details of the 1080 Umeox phone and it sounds pretty amazing. The display will be suppled by Sharp and will of course be a 1920 x 1080 unit, but it’s the 13 mega-pixel rear camera that we’re most excited about!

According to reports the 5-inch 1080 Umeox will receive a Toshiba sourced 13 mega-pixel rear sensor with impressive Carl Zeiss lenses! We’re not sure how much this phone is going to ship for, but it might be worth holding on until May for the launch! 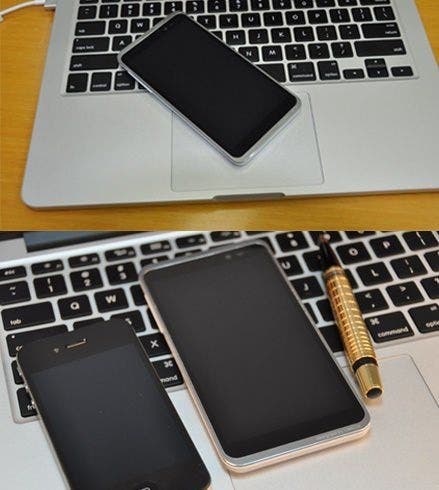 Like the 6-inch model we reported earlier, this smaller phone has a protective alloy edging, giving the phone an attractive and unique appearance, and is said to be just 8mm thick!