With just 5 days to go before the quad-core, 1080, Neo N003 is set to go on sale, Neo have announced they will update the phone with a faster 1.5Ghz Turbo chipset!

Sales for the Neo N003 will officially begin on June 25th, almost a month later than flagship phones from JiaYu and Umi already launched, however this extra wait has allowed Neo to prepare a phone with all the features customers have been crying out for rather than a half-baked product (see JiaYu G4 first batch with no OTG).

The surprise though is that Neo have eventually decided to launch the N003 with the updated 1.5Ghz MT6589T chipset! So although later to the market than others, the N003 will actually be one of the first Turbo phones available with 2GB RAM!

Actually the N003 is shaping up to be one of the more feature packed Chinese Android smartphones of the year. As we already know the display is a 5-inch 1080 OGS unit with narrow 2.78mm bezels. There will be an option of either 1GB or 2GB RAM, both models will get Android 4.2 Jelly Bean, OTG, MHL, 3000mAh battery, Yamaha audio chip and 13 mega-pixel rear camera with F/2.2 aperture. 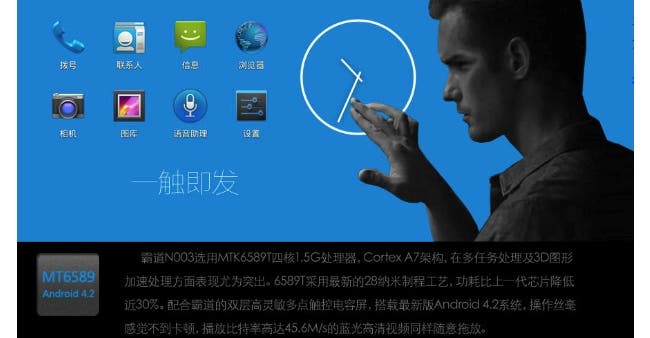 The flagship version of the N003 will cost 1499 Yuan here in China which is the same as the UMi X2, so international customers can expect to pay around $300 for the N003 when it becomes available.

Is the Neo N003 on your list of Chinese Android phones to get this year?