This is not a complete review!

Before we start I want to make it clear that this is not a complete review of the Zopo ZP998. The reason being is that this sample ZP998 is not running the final OS and some of the hardware specifications are different from what the production model will have.

Looking at photos of the Zopo ZP998 does not do the phone justice! From images it looks like a larger, more polished version of the Zopo ZP980 (Zopo C2) and in many ways it is, but the design offers more than that. 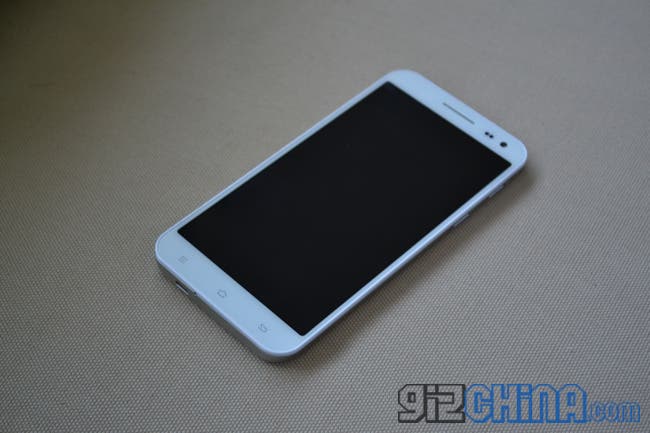 I always though that the ZP980 didn’t feel quite as premium as the hardware and pricing suggested, and worried that perhaps the ZP998 would be the same. This is not the case though! The larger flagship phone feels much more solid and very comfortable in your hand, and feels a great deal better than the previous Zopo flagship phone. 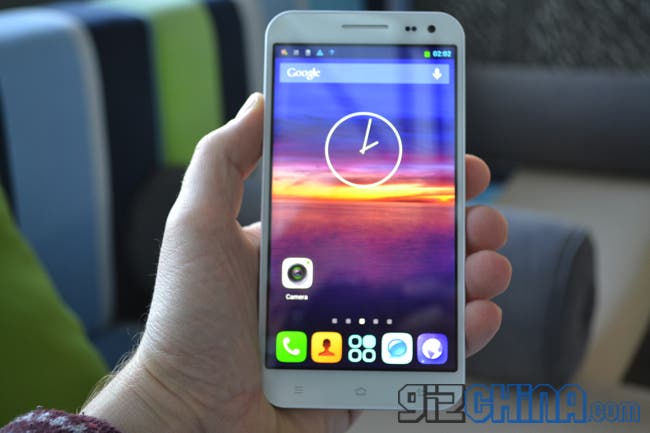 With a 5.5-inch display some of you might be worried that the Zopo ZP998 is just going to be too big, but in actual fact the phone feels more comfortable in the hand that the smaller THL T100S we reviewed recently. 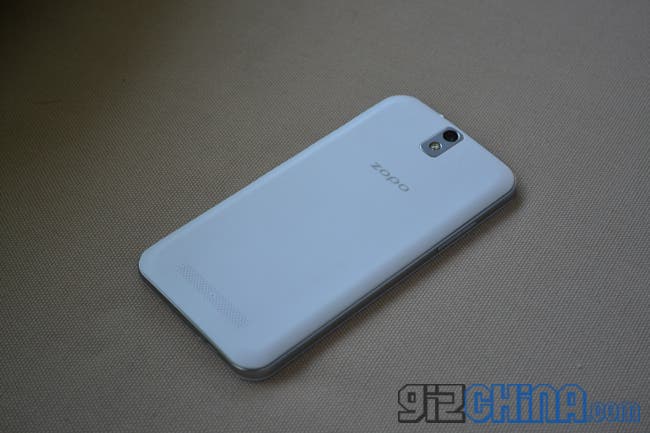 The reasons for the added comfort can be tracked down to the 76.1mm wide body, curved profile which sits nicely in your palm and textured rubberized grip on the removable back panel. After using the 5-inch THL T100S and my own 5.9-inch Oppo N1, I have to say that Zopo have got the size of the ZP998 spot on! 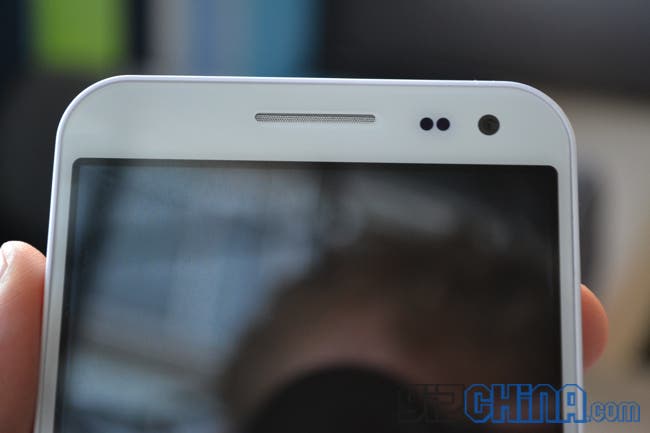 The front of the phone is mostly taken up by the large 5.5-inch FHD display. Above the screen is a front facing 5 mega-pixel camera, light sensor and proximity sensor while the receiver is located top center. 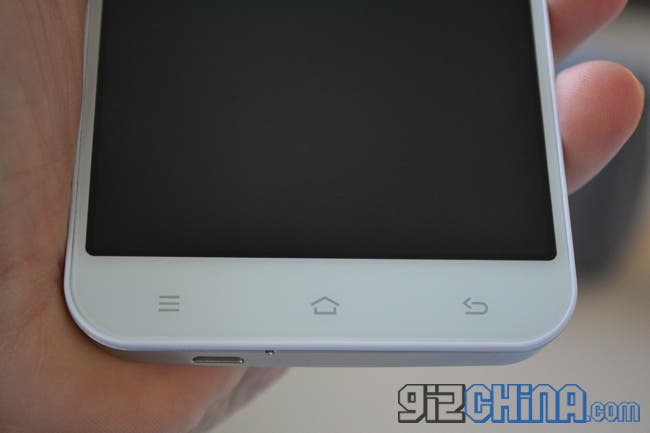 Three backlit capacitive buttons are located on the chin of the phone, and are spaced far enough apart that they don’t feel cramped in use. 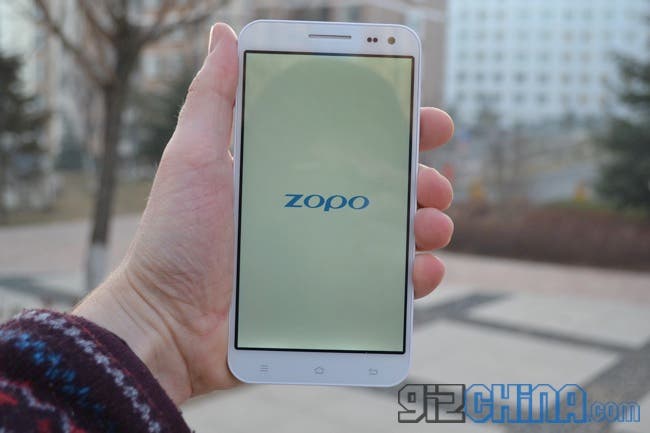 I really like phones with minimal top and lower edges which give more of a wide stance. The Galaxy Note 3 offers this look and the Zopo ZP998 isn’t far behind. The lack of extra material also means Zopo have kept overall dimensions to just 151.4 x 76.1 x 9.1mm. 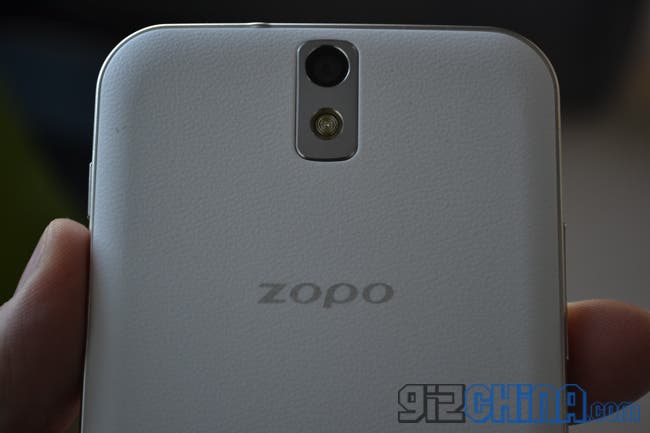 As already mentioned, the rear of the phone is coated in a comfortable rubberized finish with leather look texture. The rear is clean and simple with only a rear speaker grill, Zopo logo, rear camera and LED flash on show. The camera and LED get an alloy panel around them which reminds us of the Oppo Find 5 and should offer some protection for these delicate items. 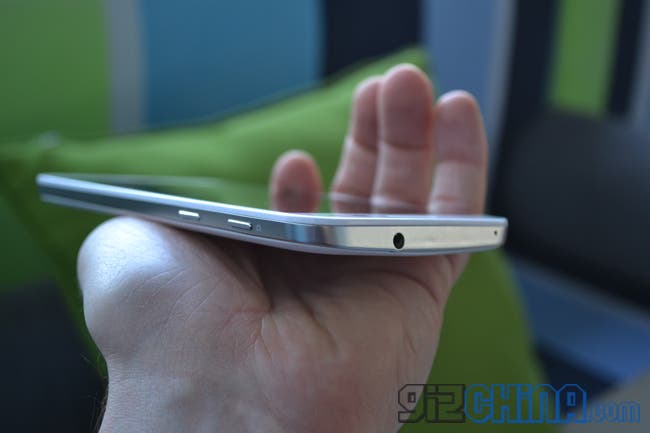 A silver plastic strip wraps around the edges of the phone, punctured here and there which a number of physical buttons. The right edge housing the power button and shutter button for taking photos. 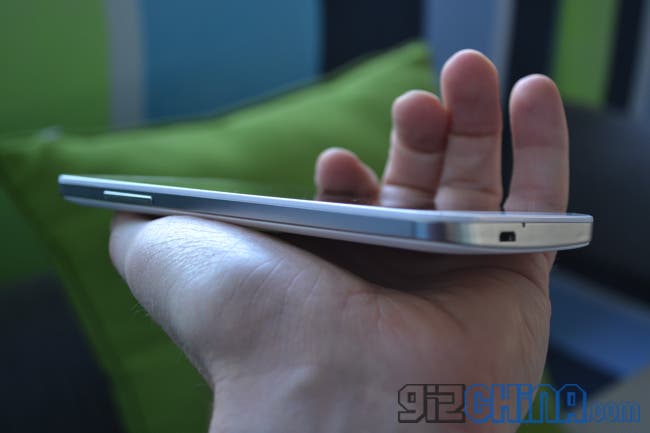 The volume rocker is on the left side and 3.5mm head phone jack in the top while the micro USB sits in the base. The buttons on our preproduction sample of the phone had not rattles and fitted tightly in the body, but have a low profile making them difficult to locate at times. The overall feel of the phone is solid and flex free! A big update compared to other Zopo phones. 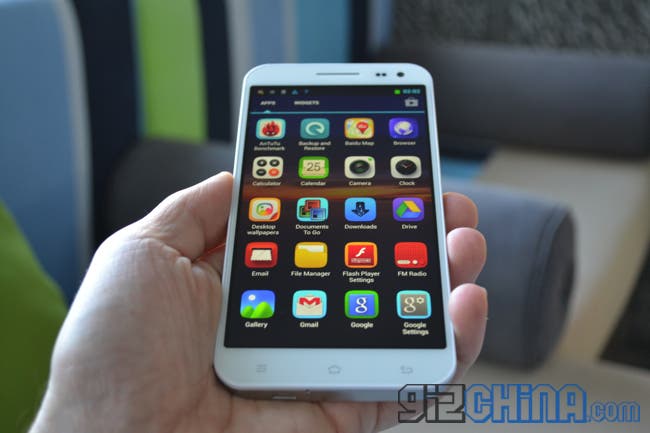 A big display is often more susceptible to scratches, knock and drops, so it is reassuring to know that Zopo have gone with a Corning Gorilla Glass 2 panel to help protect the phone from accidents. 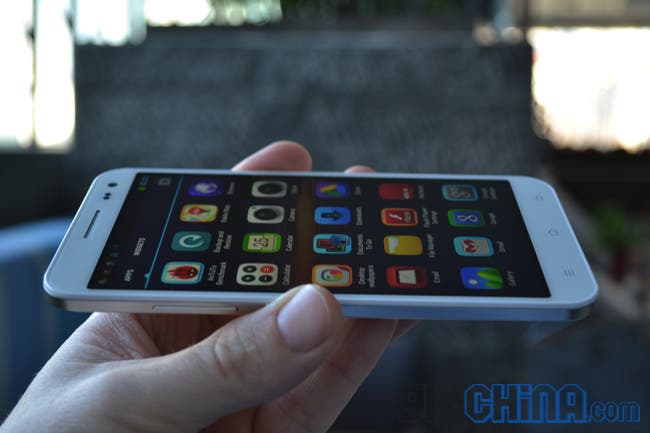 As you would hope for a FHD flagship phone of this price, the IPS panel offers great viewing angles in all but the brightest sunniest conditions, but then again that’s the same as pretty much every phone regardless of brand or price. 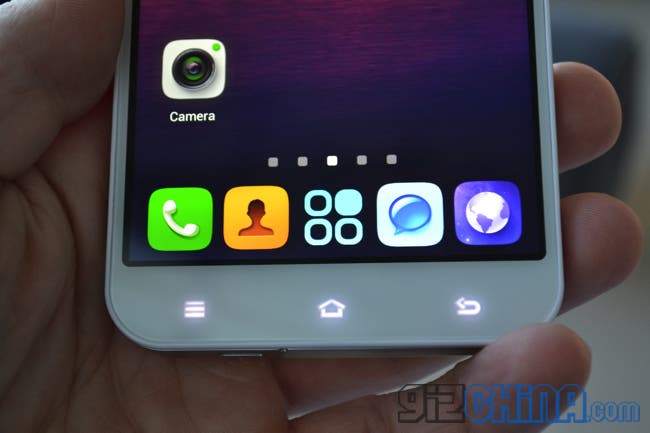 During our hands on with the phone we found the display to be fast and responsive and didn’t suffer from ghost touching which we know has been an issue with other Zopo phones in the past.

Unfortunately the pre-production sample of the ZP998 which we have on test has an unfinished version of Zopo’s ROM installed and we were unable to launch apps which we had installed on the phone, and so couldn’t run benchmarks or even games.

Thankfully we were at the launch of the Zopo ZP998 where we did manage to load Antutu on to one of the demo phones at the event which gave us an Antutu score of 28,118.

With a 1.7Ghz octacore MT6592 processor and 2GB RAM on board we have no concerns regarding performance and can confirm that the phone runs all the default apps well. Opening apps feels much more fluid than it does on the THL and web-browsing, video playback etc is all handled in the ZP998’s stride.

In addition to the buggy pre-production software, the Zopo ZP998 sample also had slightly different specification cameras so it would be unfair to test those so we will wait to get our hands on a final sample, to post photo samples and make a conclusion there. 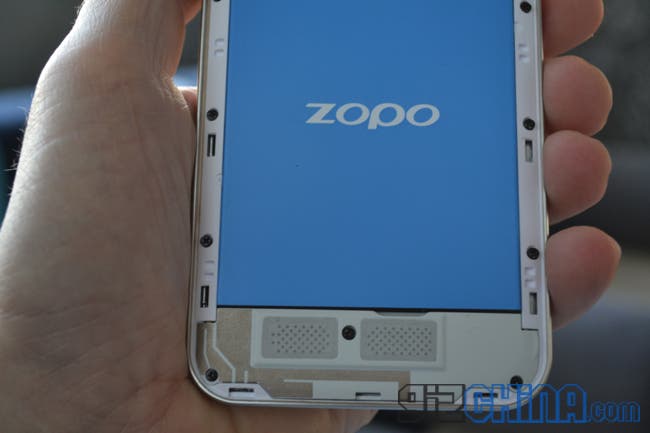 The rest of the phone worked well though including NFC, OTG, Bluetooth, GPS etc. As for battery life we really need to wait until the production unit arrives before testing properly but our sample with just a 2400mAh battery only managed to get 8 hours or run time! This while using the phone carefully as possible (switching WIFI, GPS, 3G on/off as needed etc) . Really a device of this size and with this sort of power and hardware we should be getting a 3000mAh battery at least!

This conclusion is only based on the sample we tested at the ZP998 launch and the pre-production sample we have been testing here and although the this phone isn’t working completely as it should we have enjoyed using the device. 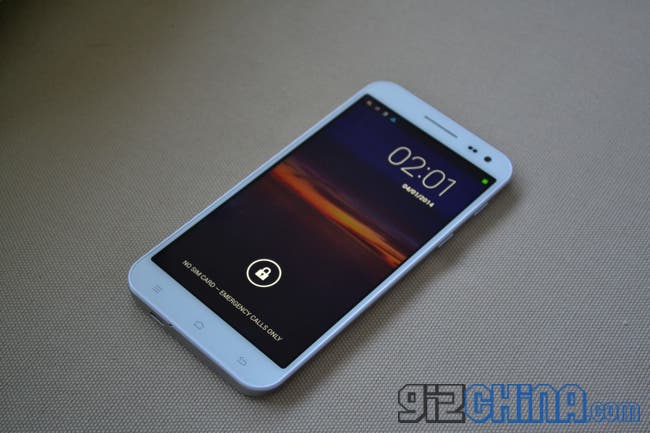 The Zopo ZP998 is a well designed phone, a great shape, manufactured well and is almost the perfect compromise for me regarding screen size and overall phone size. As we found with the THL T100S performance is as good on the Zopo ZP998 as it is on a well sorted quad-core Mediatek machine which is fine by us, but we hope to see more apps make use of the extra resources as the year goes by. 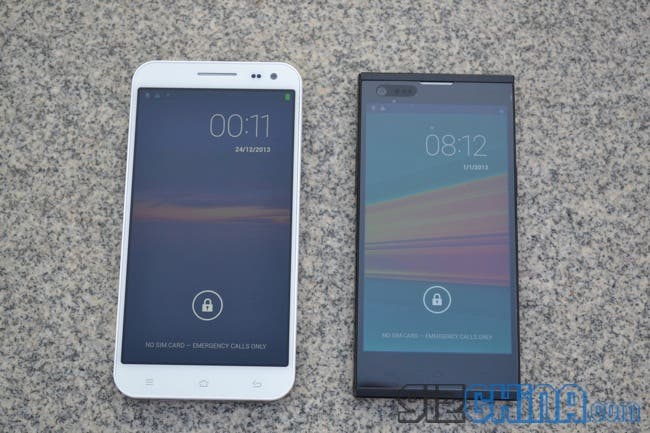 If I had to choose between the THL T100S and the Zopo ZP998 the Zopo gets my vote of octacore Mediatek phone. It is better built, more comfortable and is overall more interesting to use, but we will keep our final conclusion until we have had chance to review the production model of the Zopo ZP998 in the future.