Just as we predicted, Xiaomi are expected to launch a 4G lte version of the Xiaomi Mi3 in April of this year. The Xiaomi Mi3S also appears to be the source of recent Antutu screenshots.

After leaked Antutu scores showed up for a mystery phone named the Xiaomi Mi4W, reporters have been snooping around to see if they can uncover any facts about this new smartphone. As we had already pointed out (and predicted last year) the benchmarks looked a whole lot like an updated Xiaomi Mi3S rather than whole new phone, and the latest reports see coberate this idea. 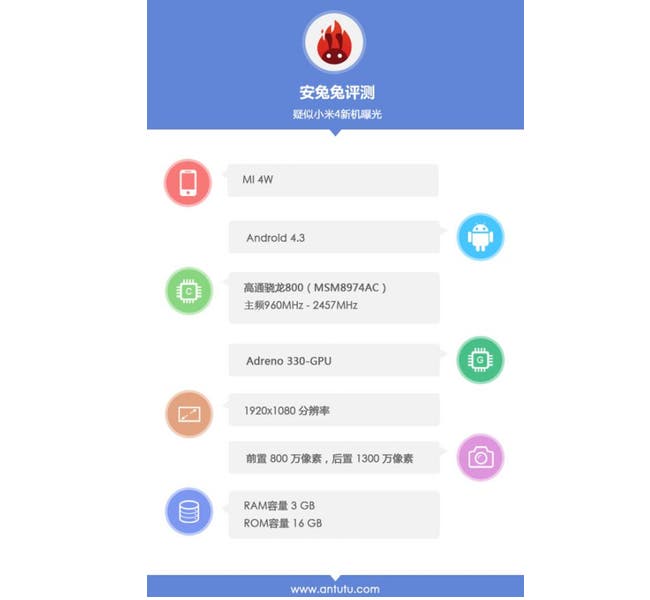 According to sources, Xiaomi will launch the Xiaomi Mi3S in April. The phone will be visually the same to the current Xiaomi Mi3 but will receive some under the hood updates including 3GB RAM, an 8 mega-pixel rear camera and 4G lte support (FDD LTE / TD-LTE). The reports have only mentioned one version of the phone which will be powered by a Snapdragon 800 processor.

At the same time, Xiaomi are believed to launch a Xiaom M3S model and 2 versions of the Xiaomi Hongmi (Redmi) with at least one of these phones getting an octacore MT6592 chipset.

Xiaomi have used the mid-life hardware update on their phones since the start, so it comes as no surprise that the Xiaomi Mi3S will launch so soon, but how about the Xiaomi mi4.

Sources have also found a few details about this phone too. Apparently the Xiaomi mi4 will launch in Q3, have a 2K display and be powered by a Snapdragon 805 chipset!