If you were looking for some great news to start of the day then Pete Lau, founder and CEO of China’s OnePlus has it for you!

In a short to the point, Google+ posting, Ex Oppo head honcho Pete Lau announced that his company’s first smarphone will cost less than $500! The flaship device and first phone from the brave new company is confired to have 4G LTE support and will come unlocked and off contract! 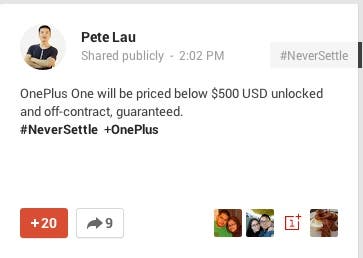 Pete Lau and the OnePlus team made headlines after the team left Oppo to set up their own phone brand. Since that time the company have forged a ground breaking deal with CyanogenMod which will see the popular third party developer create a custom Android based OS for the OnePlus device!