We now know about the OnePlus One more than ever before, perhaps enough for you to make a decision on whether or not the device is suited for you. With much of the staff coming from OPPO, you’re certain the company will go the extra mile to ensure customer satisfaction. However, if you are looking for all OnePlus One info put together in one place, you might want to read on!

Those following OnePlus proceedings here on GizChina might already be aware of the company’s roots. Headed by ex-OPPO chief Pete Lau, OnePlus is a startup with an aim to deliver the most usable hardware at an affordable price. Quite clearly, the company isn’t keen on just throwing the kitchen sink at you, but rather a more fulfilling user experience.

What’s most exciting about the OnePlus venture is that the company has a partner in the very well known CyanogenMod Inc. CyanogenMod is perhaps the most popular 3rd party firmware for Android phones, hugely popular with enthusiasts from around the world.

OnePlus made us play the waiting game for quite some time before starting to spill the beans on the One’s specifications. Thanks to numerous leaks, announcements and spy photos, we know quite a bit about the device now, and as previously mentioned, you will perhaps be able to make up your mind on whether you want the device or not.

OnePlus even hosted an ‘Ask Me Anything’ session on Reddit, which allowed those keeping track of the device to get in touch with folks behind OnePlus for better insight.

With the average smartphone screen size going up every passing day, it is but natural for OnePlus to include something which would please a major chunk of the market. The company decided to go with a 5.5-inch 1080p display sourced from well-known manufacturer JDI. There were talks of a 1440 x 2560 pixel display, which would put the One directly against the OPPO Find 7; however, these rumours were rubbished once the company divulged display info about a week back. 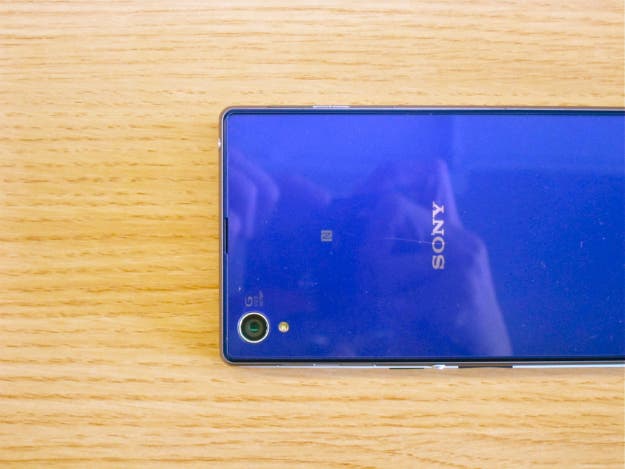 While many hoped for a smaller display, Pete Lau assured the world that it is a 5.5-inch panel that we need. The picture of a OnePlus One stacked (and hidden) beneath a Sony Xperia Z1 went viral on the web. Lau basically wanted to show that the 5.5-inch screen’d One could hide under an Xperia Z1 which comes with a  5-inch screen.

With the sort of hype that the OnePlus One was enjoying, it was fair for those following proceedings to have high expectations. We have to admit, even we expected the device to have a Snapdragon 805, or at least a Snapdragon 801. However, to the disappointment of many, OnePlus announced that their first phone would have only a Snapdragon 800 SoC.

That being said, the company again did a fair job at convincing us that Snapdragon 800 was the way to go, citing balance between availability and cost as the reason. To think of it, it might actually work out well with the much less resource hungry CyanogenMod OS taken centre stage instead of a heavily skinned, ugly looking ROM. 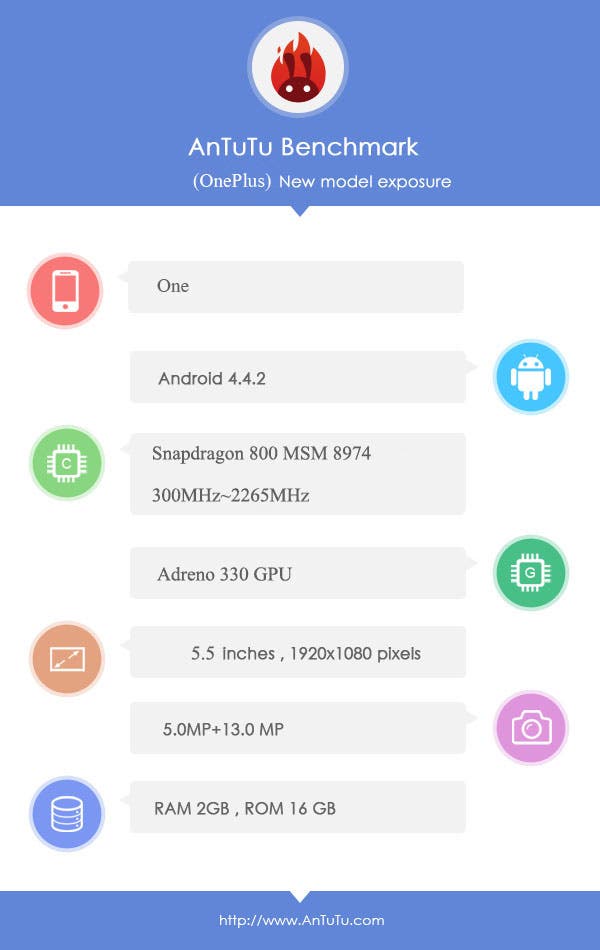 That was for the official announcement from the company, but thanks to a leaked screenshot from the AnTuTu database we were treated to the RAM info on the device, which stays at a good 2GB. While many flagships have started popping up with 3GB on-board, we at GizChina think 2GB of RAM is enough to drive a moderate to advanced user, especially when paired with a light OS such as CyanogenMod.

Poor battery life is something that concerns (and undeniably, affects) one and all, and OnePlus hope to eliminate this problem by including a 3100mAh non-removable battery on the OnePlus One. Along with this, the company said that there would be a technology to further extend usage on a single charge. In fact, they even called it ‘mystery tech’ saving us the effort of trying to make things interesting for our readers!

On why they the went non-removable route, the company said a removable battery would mean a loss of about 20% of the capacity, which they thought was crucial for their phone and something they couldn’t afford.

The device is all set to appeal to users from all around the globe with its unlocked radio which has support for 4G LTE!

Only recently, OnePlus announced that the One will have a 13 mega-pixel rear camera which would come from Sony factories. It’s the Sony Exmor IMX214 sensor, which on the OnePlus One will do 4K video capture, which will make the device among the cheaper ones to feature 4K video (remember, the device will sell for under $400?). The 13 mega-pixel shooter will have a f/2.0 aperture and the ability to record slow-motion video at 120fps. On the front, the OnePlus One will feature a 5 mega-pixel snapper which should please selfie lovers and video call users alike.

Only few hours back (at the time of writing), the company announced that there will be a bit of customization thrown in, in the form of what OnePlus call ‘StyleSwap’ rear cases for the device. Among other styles and textures that might be made available in the future, the company would be offering Silk, Sandstone, Denim, Bamboo, and Kevlar textured StyleSwap covers. What’s more, the covers would be made out of their respective materials, meaning Bamboo out of a stick of bamboo, Kevlar out of actual kevlar and so on!

The company has also been active on their forums, taking part in discussions and interacting with fans and followers. This has lead many to think of OnePlus as a very ‘approachable’ company, something which other (even well established) ones are after.

Another thing you need to keep in mind (yes, again) that the OnePlus One will come with the very efficient CyanogenMod OS, tailor made for the device. The software is light on resources, and offers very high levels of customisability. Also, we might as well see OnePlus adopt the very successful OPPO model wherein users can request for features and other things, which are scrutinized by the software team, after which a decision is made whether or not the feature is to be added. 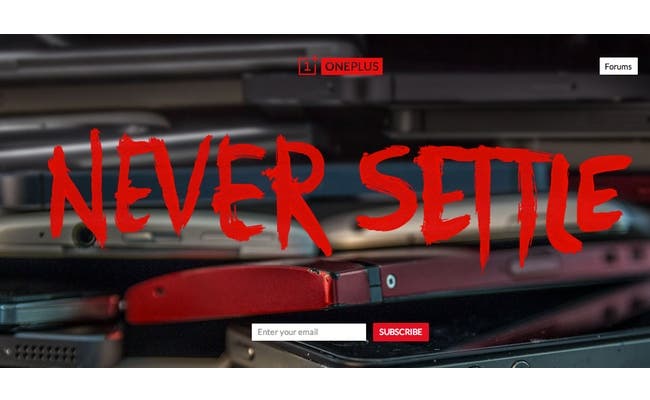 So here we ask you — would you let go of your current smartphone to make way for the 5.5-inch, Snapdragon 800 powered OnePlus One? Are you willing to give a rather ambitious startup a chance with your next toy? Or do you have other ideas (Hint: OPPO Find 7)?

We’re very interested to know what you think. Perhaps a 1440p display would’ve sealed the deal for you, maybe you think 1080p is enough, etc… we’d love to hear from you! . Let us know of your thoughts on the OnePlus One in the comments section below!

Next Video: Walk through a Chinese Phone Market! Filmed on Oppo Find 7