Call us sceptical but we feel that these OnePlus 2 leaks look a little fish to us, but what do you think?

In less than a month OnePlus will announce the launch of the OnePlus 2 with Snapdragon 810 processor and USB Type C plug. USB Type C and an 820 chipset are the only officially confirmed details, but if you have been following OnePlus this year you will also know that the phone is believed to get a “better than touch ID” fingerprint scanner too.

With very little known about the phone, and a lot of expectation surrounding the device, everyone is scrabbling to get their hands on the latest info first. Which leads us to these purported leaked images posted over the weekend.

Had the images only shown the front (above) I think we could have believed that these are the real thing, but the 2nd image of the rear looks photoshopped to us. 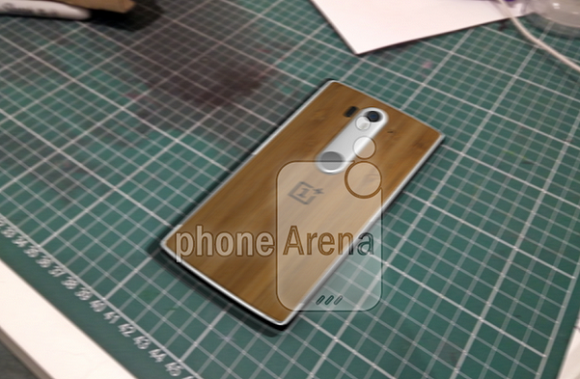 However, if they are real we can see that the overall shape of the phone has remained unchanged and that the recessed metal bezels has remained. The (fishy) rear image shows a wooden rear panel with 1+ branding, dual LED flash and fingerprint scanner.

The first image also shows the use of onscreen controls, less of a chin, and narrower bezels that the current OPO.

What do you think of the images? Real? Fake? or partially accurate? Meanwhile the original OnePlus One is still largely available in Bamboo, to Sandstone and Babyskin from $279.99.