We’ve seen Hisense phones in the past but at IFA the Chinese phone maker intends to kick up a storm with the release of the new 5.43mm thick Hisense C1 Series.

Chinese phone makers love to make ultra-thin phones, and the names we normally associate with those devices are Oppo, Vivo, and Gionee. Qingdao, based Hisense are adding their name to the list with the new C1 Series phones.

I managed to track down the C1 during the final day of preparation for tomorrows IFA opening day. The phone features an ultra slim gold CNC alloy chassis measuring only 5.43mm thick. 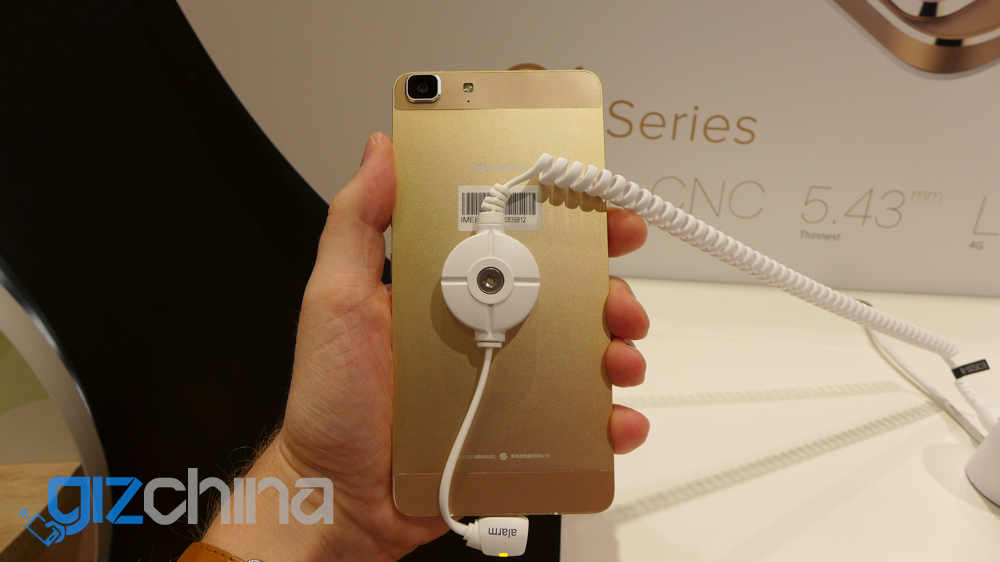 The impressive thickness is only let down by the fact the camera on the rear protrudes from the body by a few mm, meaning that the 5.5-inch phone rests on the main camera lens when resting on a table or work surface.

That gold chassis is a very lightweight alloy antibody with 3.5mm headphone jack in the base and dual SIM trays on the left hand side. On screen navigation buttons take up some of the space of the 5.5-inch HD Super Amoled panel despite a generous chin area which would have made a great locating for hardware buttons.

Inside the 154.55 x 75 x 5.43mm chassis we find a 2500mAh battery with Quick charge 2.0, 16GB internal memory, 2GB RAM and a Snapdragon 615 chipset. There is good news in the LTE department as Hisense say the C1 Series will support LTE B1/B3/B7/B20/B38/B40 along with WCDMA and GSM networks. Camera hardware is a 13 mega-pixel main camera with single LED flash and 5 mega-pixel front camera.

Hisense will be launching the C1 in China first with a view to launch elsewhere at a later date.

Previous Warning: GetOne is selling Xiaomi Mi Band for only $9.99!