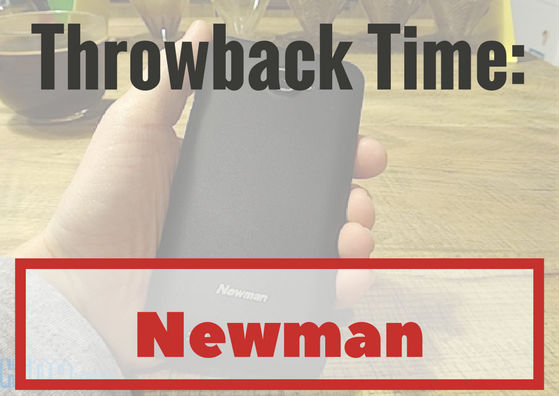 Well, here we are again on Throwback Time, ready to look back at another company that left its mark on the Chinese market. A huge thanks to everyone in the comments of the last Throwback, I’m happy to say you’ll be seeing some of your suggestions featured soon.

For now however, we’ll be focusing on today’s featured company. Today’s company is rather different from the previous two companies we’ve covered in that this company’s devices weren’t limited to MediaTek chipsets.

Although the company managed to score quite a few hits, they eventually lost their stride and disappeared from the internet like many before them. Or did they? Maybe you’ll be surprised by what you see.

Newman: What did they do?

Before Newman joined the Chinese smartphone market, Newman were a popular manufacture of MP3 and PMP (portable media player) devices in China, but as the Android smartphone boom began they too jumped ship and launched a couple of Android devices.

Their first new phones were exciting flagship devices, but as time drew on Newman found it hard to compete in a very crowded market and so went quiet.

But before we touch on those devices, let’s take a look at their first smartphone, and one of their most popular devices. This device was known as a decent alternative to the great JiaYu G3, and is still considered one of the better Chinese devices from that time period. This device was the Newman N1.

The Newman N1 was a very simple device. Its specs weren’t as high as competing devices like the JiaYu G3 or UMI X1 and there wasn’t really anything that made the N1 stand out from the pack. It didn’t even have an HD display, instead opting for a qHD display.

Despite that, the N1 did have one advantage, and that was the fact that the N1 made it to the market much quicker than its competitors. This, combined with the N1’s solid performance allowed Newman to quickly gain many fans amongst the Chinese smartphone crowd.

The N1 itself was a fairly good device. It had an eye pleasing design, good performance from its MT6577 dual-core processor and an average camera. However, it also had a plethora of bugs that held the device back to a degree. It still sold loads though, and people were lucky to even find a retailer that had the device in stock.

With this, Newman had successfully joined the big boys of the Chinese market, and people were looking forward to see how their next flagship device would turn out. Nobody could’ve known that the next device from Newman would be so different from everything else.

Their next big hit

When Newman announced the Newman N2, people were very surprised. Not because of the design, which was a plain and generic rectangle, but because the specs were a clear cut above every other device.

For starters, the Newman N2 was the one of the first Chinese manufacturers outside of Meizu to utilize a Samsung processor in their device with the Exynos 4412 being at the heart of the device.

On top of that, the Newman N2 was also the first Chinese smartphone to have a 13MP camera on its back. While that may seem like the standard these days, it was a huge thing back when people thought the MP count actually gave you better camera performance.

Add to that the solid specs of the device, and you’ve got yourself a winner of a device! Kind of. The Newman N2 was a good device, but like its predecessor, it too suffered from numerous bugs and problems that simply made the user experience frustrating.

Newman would eventually roll out software updates to fix the bugs, but they came out slowly and only a few bugs would be fixed per update, while users would just have to deal with the other bugs while they waited.

Still, the Newman N2 was a pretty big deal, and it was a popular device amongst Chinese smartphone enthusiasts. While people were still happy with the device, many were also disappointed that Newman had once again delivered a buggy product and were done with the brand, which didn’t bode well for their next few devices.

While many predicted that Newman would follow up the Newman N2 with another Exynos powered device, those predictions were pretty much trampled on when Newman instead launched the Newman K1, a device that was a clear downgrade from the N2 on its spec sheet.

Unfortunately, this device came around a bit too late to the party. Newman fans who stayed with the company after the buggy N2 wanted to see another Exynos device, and those who wanted a bug free phone had left for other competing devices like the fantastic JiaYu G4 or iOcean X7.

The K1 was an unsuccessful endeavor, and this would sadly become a bit of a trend for Newman’s next bunch of devices.

After the K1, Newman decided to drop the N-series of devices and made the K2, a large device aimed squarely at the phablet section of the market. Although the device functioned fine, the unimpressive design and high price compared to competitors resulted in the device getting overshadowed by everything else.

By now, Newman had realized that things weren’t working out and decided to take a brief hiatus from the smartphone business for a few months. During that time, they’d release leaks of an early version of the Newman K18, an upcoming device that they’d only release months later.

Once Newman busted back onto the scene, they quickly got to work hyping up their next device, the 6.18mm Newman K18, now with a completely new design. Touted as a super slim device with high performance and great specs, people eagerly waited for the launch of the device.

When the device finally launched however, it managed to completely go under everyone’s radar and was pretty much ignored in favor of the competition. While the actual reason for this isn’t really clear, it’s highly possible that people were turned off by the device’s tiny 2000mAh battery, which really should have been bigger.

A few months later, the company released a version of the K18 running Alibaba’s YunOS called the Newman K3, and the company would then disappear from the smartphone scene for a long time.

One year after, the company would once again appear out of nowhere and release another smartphone, this time the Newman ‘Button’ phone, which featured a fingerprint sensor on the upper right of the device. To put it simply, almost no one cared for the device and it was quickly forgotten by the masses.

So are they dead now?

This is where things get interesting. While NEWMAN as we know it may have died away, Newsmy, which is Newman’s Tablet and accessories arm, is still fine and actively selling new Android devices in China.

While Newman is really only known for the devices that I’ve specified above, Newsmy has made a huge plethora of tablets and gadgets that got any attention outside of China. Unfortunately, Newman seems to have stopped making smartphones and tablets, but their other business seems to still be going strong.

And what type of business is that you may ask? Android powered car smart systems. You heard that right. They currently sell Android powered smart systems that can be installed into your car, and they’ve got quite the selection as well. Don’t believe me? You can actually see and buy them from their website right here.

This sort of thing is why I like making this series. It’s really interesting when you find a company you thought was dead only to find them thriving somewhere else. It’s really fun. Also a little bit of trivia for you, the Newman K1 review was the first article I ever wrote for Gizchina.com. It’s great to be able to look back at those times.

And with that, we’ve come to the end of this Throwback Time. I hope you enjoyed this one as much as I enjoyed researching for it, and feel free to discuss or give suggestions in the comments below, I really appreciate it.

Next time on Throwback Time, we’ll be having a look at a company that has been requested by quite a few people now (I saw you mf1gt3r!). Check in next time where we cover NEO, the manufacturer that until this day is still loved and remembered. Until then!