Huawei obviously isn’t done releasing phones for the year, in fact, the company has already issued press invites for a UK launch event where it is expected to announce a bezel-free device, which could turn out to be the V10.

Now, three different has received 3C Certification in China. It is a requirement that basically tells consumers that the product has been properly tested and is safe for use in China.

These three devices are listed by 3C with model number BKL-AL00, *NI-ALOO, and BKL-AL20. And while the site gives no further details about the listed devices, there are speculations that the device could well be different variants of the upcoming Huawei Honor V10. Our best bet is that they could be the Honor V10, V10 plus and V10 lite.

As for the Honor V10, the device will be made of all metal-based construction which resembles some other Huawei, Honor smartphones and expected to come with big display and reduced side bezels.In specific terms, the device will come with a 5.99” 18:9 display with a 2160 x 1080 resolution and powered by the very latest Huawei Kirin 970- Huawei’s flagship SoC with integrated AI computing capabilities and the first commercial SoC to use ARM latest Mali-G72 GPU. 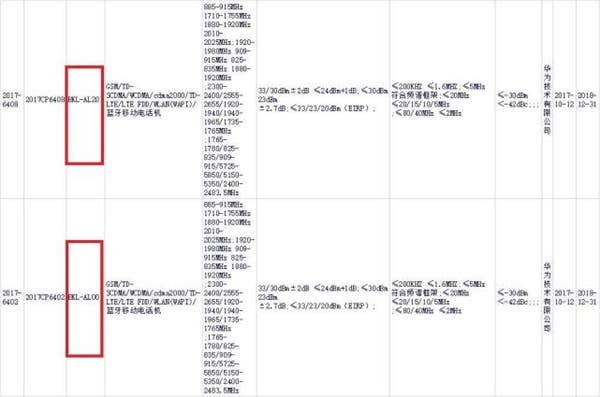 Huawei is also rumored to bring the device in 6GB RAM + 64GB ROM and 6GB RAM + 128GB ROM combinations, while the mate 10 camera setup would be used, but without the Leica branding.