The first-gen Smartisan Nuts Pro was a great phone with at least two selling points in face of the stunning look and dual-camera. Actually, this device has been designed with a goal in mind to attract at first sight. It did. Unlike many phones available in the market, the Nuts Pro came with flat panels on front and back. Thanks to the glass used for both sides and the metal for the rest of the body, the Nuts pro looks like a premium flagship device. The company even sued the third-gen Corning Gorilla Glass to protect the phone from ‘scars’. As for the second selling point, that’s not a secret dual-camera has been the trendiest feature at the beginning of 2017. So it’s quite reasonable why Smartisan packs its flagship with an identical camera module. But everything changes. The most sophisticated smartphone feature at this moment is considered to be the full-screen. All manufacturers regardless their market share and ambitions come with a corresponding device. This company is no exception. As the leaked photo showcases, the Smartisan Nuts Pro 2 will use a full-screen as well.

The original model sports a 5.5-inch screen with a Full HD resolution. According to rumors, the second gen Smartisan Nuts Pro 2 will be packed with a 6-inch screen with a resolution of 2160×1080 pixels. But as the screen-to-body ratio has been increased a lot, the overall dimensions should remain the same. Moreover, the performance should be improved a lot as well. The first-gen model comes with a Snapdragon 626 processor paired with a 4+64GB memory option. This model is said to come with the latest super mid-range SoC named the Snapdragon 660. The memory capacity is unknown yet, but it should use LPDDR4X data rate. The storage remains the same. 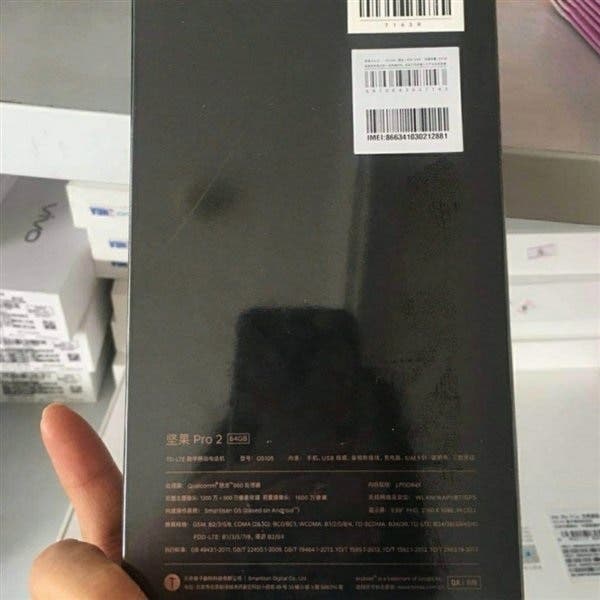 The Smartisan Nuts Pro 2 will use dual-camera again. But if the original model came with 8MP+2x13MP camera sensors on front and back, this one sports a 16MP front shooter for better selfies and 12+5MP lenses to get that bokeh effect.

At last, the Smartisan Nuts Pro came in black and red, initially. Later the light gold and chocolate variants were added to the line as well. The leaked photo shows the Smartisan Nuts Pro 2 will be in white. But what other colors will it come in as well? The phone is expected to cost around 2000 yuan ($301).

Next Huawei Mate 10 Lite (Aka MaiMang 6) Landing At Germany