The concept of full-screen smartphones has rapidly become a hot spot in the smartphones market. Now, it’s difficult to find a brand not launched its own model with this design. Xiaomi is no exception. Though the manufacturer was the first to come in with a full-screen phone in face of the Mi MIX and its successor of the Mi MIX 2, with the launch of the Xiaomi Redmi 5 and Redmi 5 Plus it officially joined the race. There were many color options announced at the release conference. And though some of them have been available for purchase, the most demanded option hasn’t gone on sale yet. Today the company announced the black Redmi 5 will be available for purchase on December 25. The 2+16GB variant is priced at 799 yuan ($121), while the 3+32GB model will cost 899 yuan ($136).

As there have been left only a few days before the black Xiaomi Redmi 5 hits the market, let’s recall its key features. The Xiaomi Redmi 5 is packed with a 5.7-inch display that comes with a resolution of 1440 x 720 pixels and an aspect ratio of 18:9. It also sports the new Snapdragon 450 octa-core chip using an A53 architecture and clocked at up to 1.8GHz. The baseband has been upgraded to X9 LTE and it supports for dual-camera, the CPU performance was enhanced by 25%, and finally, it comes with an Adreno 506 GPU. There is a 3300mAh battery that provides 4 hours longer battery life. The rest of features include a 5MP front camera, a 12MP rear camera, and 2/3GB of RAM and 16/32GB of ROM. 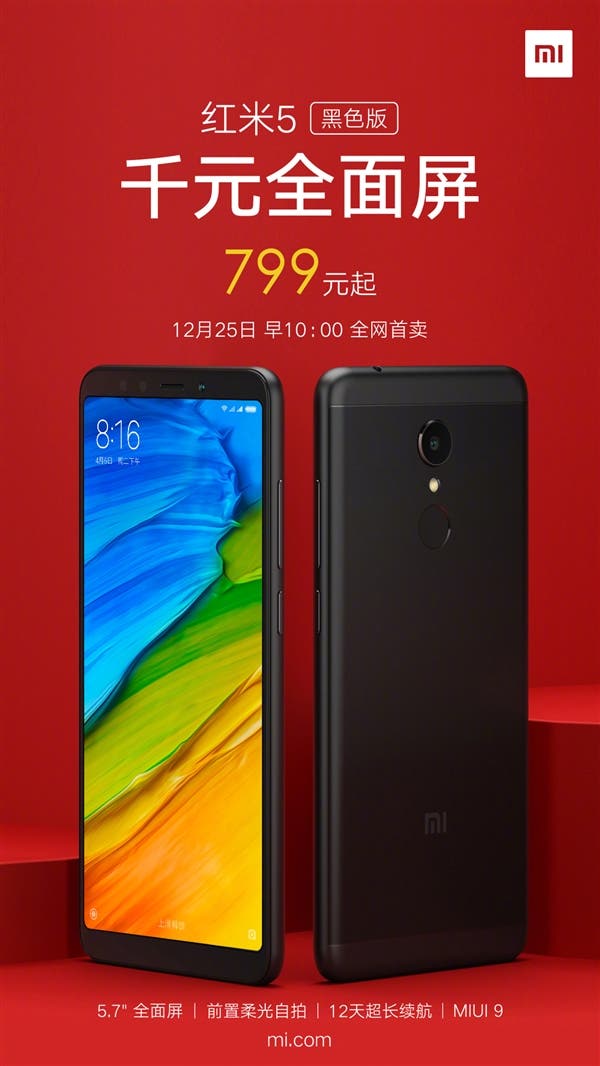 Xiaomi Redmi 5/5 Plus Launched in Taiwan, As Scheduled