2017 will for sure be remembered as a hard year for the chipset manufacturer, Qualcomm. The company saw itself involved in lawsuits against one that was once one of biggest buyer of the modems manufactured by the chip maker, Apple. After a couple of lawsuits that one filed against the other, we probably are not going to see a deal in the next year, and Apple may drop Qualcomm modems in favor of MediaTek and Intel.

Not much time ago, Qualcomm was suffering pressure for its shareholders to accept a bid from another giant in the sector, Broadcom, which offered the whopping amount of $105 billion to absorb the Snapdragon manufacturer in their business, the latter refused and until the moment Broadcom has not offered a better offer.

Besides all those negatives happenings surrounding Qualcomm, the company achieved once again the crown of Smartphone Chipset Ruler of the Market. During the third quarter of 2017, the companies responsible for about 42 percent of the revenue generated by the chipsets made for smartphones. A little more than the 41 percent reached in the same period of 2016. 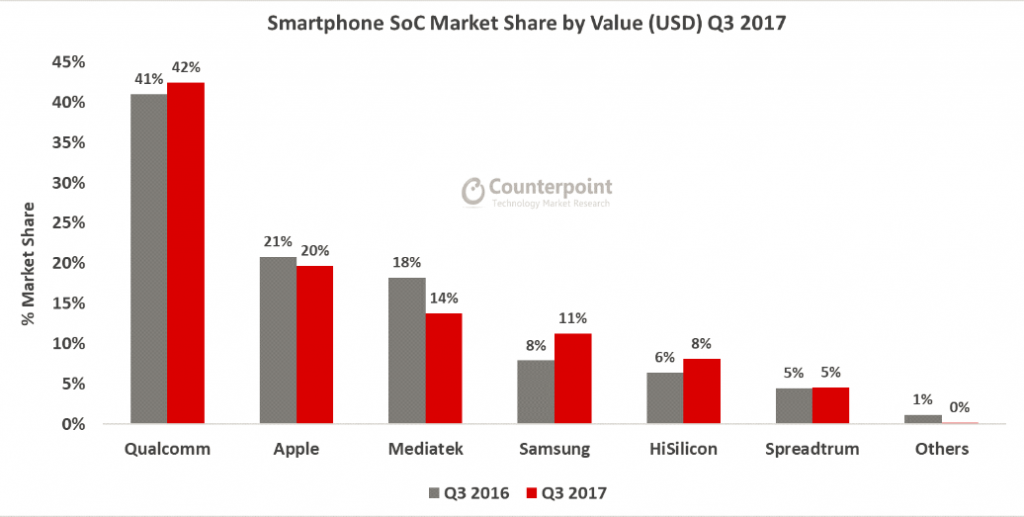 The market led by Qualcomm was followed by Apple who took the second place with 20 percent of share thanks to the Ax series inside iPhones. In third place we have MediaTek, which suffered a huge decrease from the last year, according to the research the Taiwanese manufacturer saw its 2016’s 18 percent share drop to 14 percent in 2017, that already was something expected just by examining MediaTek’s performance during this year and the lack of presence in the market of its Helio X series.

The top-three is followed by Samsung with 11 percent and by Huawei’s Hi-Silicon brand with 8 percent of market share. According to the Counterpoint researchers, not everything was roses for Qualcomm, which saw its share shrink during Q3 mostly due to the strong strategies adopted by other companies like Samsung and Huawei that employed their own processors in many of smartphones. 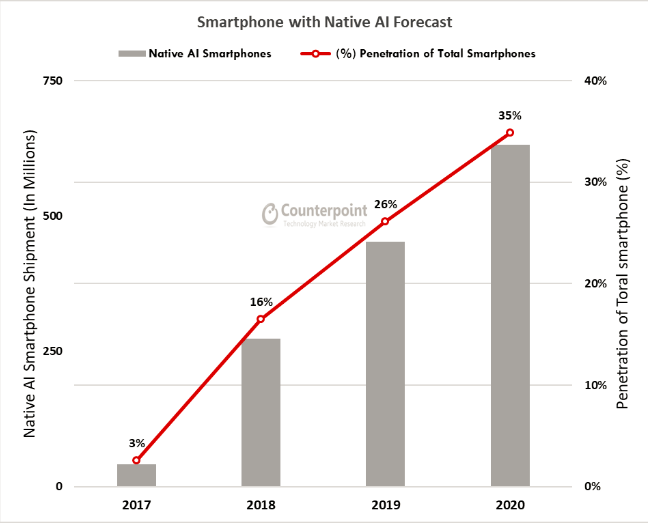 Counterpoint states an overall SoC revenue of $8 billion in the Q3 2017 which means 19 percent year-to-year increase. According to the Counterpoint Researcher Director Neil Shah, the companies have moved their strategy that previously was focused on the total amount of cores to the overall experience delivered by the Chipsets. The race for reducing nm, the AI capable SoCs, all this according to Mr.Shah is something that may become a Trend in the next year.

We are yet to see the next episodes of Qualcomm’s history, according to reports Broadcom is preparing a new bid over the chipset maker, considering Qualcomm’s rule this is something that every brand and every competitor will be following closely in the next months.