Oneplus had earlier in January started Android Oreo roll-out for the  OnePlus 5T, but, the update was temporarily halted and put on hold due to some bugs. Today, OP now seems to have resolved the issues with the update as the company has once again started rolling out the Oreo update to OnePlus 5T users.

Aside from the changelog of the first rollout which  updated the launcher to version 2.2, Gallery to version 2.0, Weather to version 1.9 and File Manager to version 1.7.6 including the usual Oreo’s features such as the Picture-in-Picture, notification dots and autofill among other things, the latest update adds nothing new to the system aside a  general bug fixes.

For those currently on the halted  OxygenOS 5.0.2, the new update should be just 39MB in size, while users still on the Android 7 Nougat should expect a bigger update. 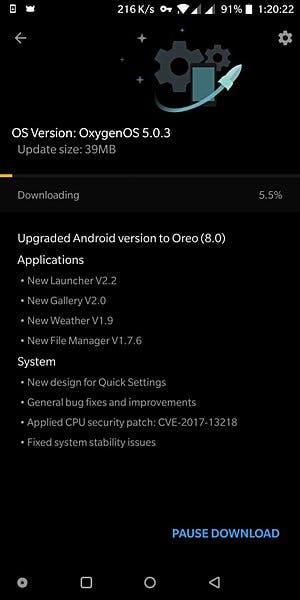 For more details check the changelog:

Previous OnePlus 5T To Get a New Red Color Option