Smartisan doesn’t launch too many products, but all of its products sell well. Its latest smartphone was the Smartisan Nut 3 that was launched to replace the former flagship, the Smartisan Nut Pro 2. And though the third-gen model comes with many attractive features, the true Smartisan fans are waiting for the Smartisan R1 that is going to be a revolutionary device. As you know, the latter is set to release on May 15 and its selling point will be an overhauled UI with AI. It turns out the manufacturer will release the second eye-catching in a short time period. So to boost the sales of the previous flagships and free space for the upcoming models it’s been expected the Nuts Pro 2 will get official discounts. Fortunately, our expectations are justified, as today the company announced two variants’ price tags are slashed by 200 yuan ($31). This simply means the 4+32GB model is sold for 1499 yuan ($237), while the 4+64GB handset is available at 1699 yuan ($268).

We know, the selling point of the Smartisan Nut Pro 2 is its appearance. It has a metal body using an aluminum alloy. The surface has passed through the metal blasting process, while CNC crafting is used for both edges. Plus, the manufacturer has used this process to make a groove in the middle of the frame. So the phone looks thinner than it is.

But this phone also comes with a respectable hardware. In front, it sports a 5.99-inch 18:9 InCell full-screen. Seems nothing special, but the screen parameters are eye-catching: 403ppi pixel density; a contrast ratio of 1500: 1; NTSC color gamut coverage of 80%; 500nit brightness; and Corning Gorilla Glass 3. 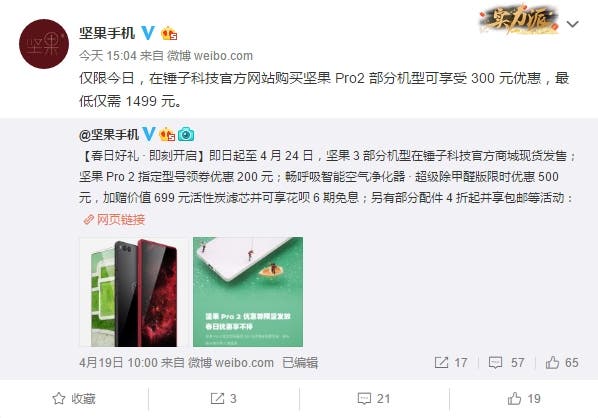 At last, the Smartisan Nut Pro 2 sports a 12MP black/white dual-camera program that uses a Sony IMX386 sensor with a single pixel size of 1.25 microns, 6P lens, and an aperture of f/1.8. It is paired with a Samsung S5K4E8 sensor of 5MP with a pixel size of 1.4 microns. On the front, it carries a 16MP camera that not only supports beautify (a special algorithm provided by Momo) but also face recognition that uses the Face++ algorithm.

Next LG K9 and K11 debuts in Italy