Though at this moment, OPPO has a quite solid list of amazing smartphones, it is not going to stop. Apart from the recently released OPPO Find X and the OPPO R15 series that was out earlier, the company is going to launch two new models. As you should know, the OPPO R17 and OPPO F9 are on the way. And they will hit the market in the nearest future. Previously, it’s been thought these handsets will have many common things. But the spotted specs list of the F9 shows these phones will be positioned on different markets. 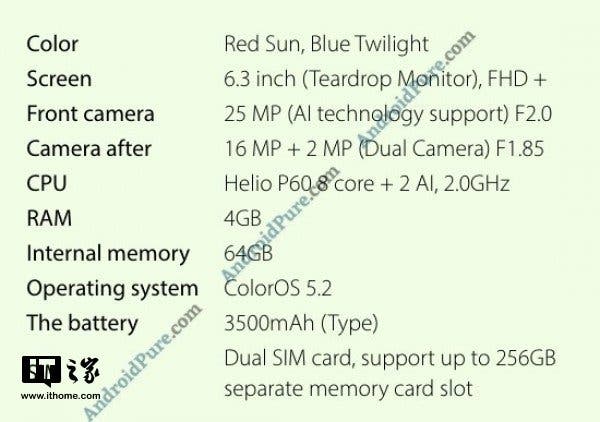 According to the leaked features list, the upcoming OPPO F9 will be packed with the same processor as its predecessor, the OPPO F7. Thus, instead of a Qualcomm chip, it will come with a MediaTek Helio P60. As you know, the latter is the Taiwanese company’s first AI chip, which has managed to make a name.

ITHome claims the upcoming OPPO F9 will be available in two color options of Red Sun and Blue Twilight. And seems it will differ from the OPPO R17 in terms of appearance and the color as well.

Rest of the features are said to include a 6.3-inch touchscreen with a resolution of 2280×1080, a screen ratio of 90.8%, and an aspect ratio of 19.5:9. There is also a rear 16MP + 2MP dual-camera and a front-facing 25MP single camera that should be placed in a specially-shaped notch, namely Beauty tip. As we said, under the hood, it will carry a MediaTek Helio P60 processor, paired with 4GB+64GB storage configuration and a 3500mAh battery. The phone will support dual-SIM cards.