The current mi MIX series models in face of the Mi MIX 2 and Mi MIX 2S have got huge discounts. This is a serious hint at the upcoming release of the Xiaomi Mi MIX 3. Actually, the rumors about the next-gen MIX phone have been buzzing in the net for a while, but until today, we haven’t got anything real but a couple of leaks and tons of rumors. This makes many Mi fans and smartphone enthusiasts create their own renderings of the forthcoming device. And this time, it comes from India. 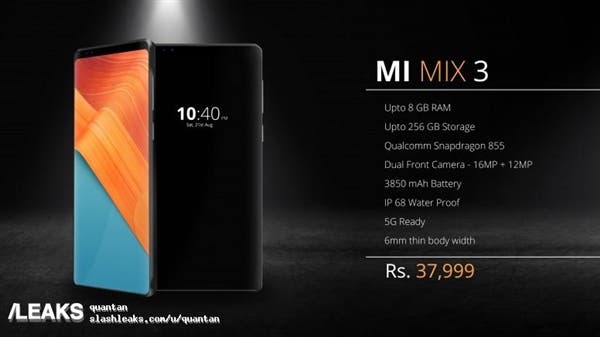 According to the Xiaomi Mi MIX 3 rendering, the phone will have no chin. If so, this will be the first Chinese smartphone with no chin. As you remember, not that long ago, we came in with an article, explaining why the Chinese smartphone makers can’t afford themselves to remove it. Actually, it’s related to expenses. The iPhone X has no chin because it is overpriced and the Cupertino-based company can afford itself anything it wants. Say, it can use the COP package.

In this sense, there is every reason to think the Xiaomi Mi MIX 3’s making will cost more. Therefore, it will be priced higher. But the source shows it will be available at 37,999 rupees ($544).

Anyway, this rendering also shows there will be narrowed forehead that will carry a dual-camera with 16MP and 12MP resolution sensors. But we have seen a couple of leaked photos, showcasing the phone will use a lifting front camera module like the VIVO NEX A. Although it’s difficult to imagine how two camera sensors will be placed on such a structure.

Apart from this, the Xiaomi Mi MIX 3 is said to come with a Snapdragon 855 chip (that is renamed to the Snapdragon 865), an 8GB of RAM, a 256GB of internal storage, a 3850mAh battery, to support an IP68 waterproofness, to pre-support 5G, and to have a body thickness of 6mm.

Next Xiaomi Mi 8 or... Poco F1? If you live in India, which one will you choose?