Yesterday, the newly announced Xiaomi Mi 9 was on everyone’s lips. It’s a really amazing handset with a number of selling points. But this phone also indicates the struggle in the high-end market will be fierce this year. Immediately after the launch of the Mi 9, Meizu CEO, Huang Zhang revealed some interesting information about the upcoming Meizu 16s flagship. Among them, we should mention the Snapdragon 855 chip as well as the unique display design with no bangs, water drop area or a punch hole. That’s why it’s called the quad-bezel-less design. As for today, the spy photo of the M16s appeared on the net. 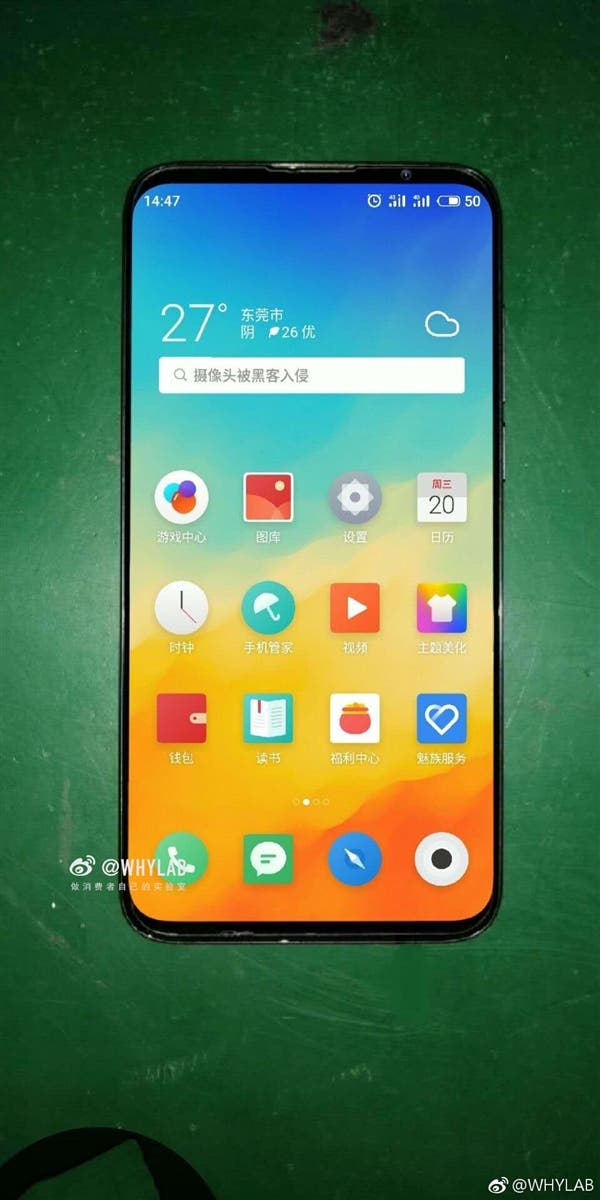 As you can see, the Meizu 16s is going to be a genuine full-screen smartphone. The forehead, chin, and left and right borders are very narrow, and there is no ‘black’ area on the top, such as the notch, the drop or the punch-hole. Thus, this phone is in line with what we have heard previously. In fact, the front camera is placed in a narrow forehead, and the earpiece and sensor are assumed to be on the top edge.

According to Huang Zhang, the Meizu 16s uses a 6.2-inch full-screen. The screen width is the same as the 19.5:9 ratio of 6.39 inches. It is equal to the slightly shortened version of the 6.39/6.4-inch screen. It turns out the experience is the same but the body is smaller. At the same time, the chin is 1.5mm thinner than that of the Meizu 16. At last, the front panel is covered with the Corning’s sixth-generation Gorilla Glass.

The battery capacity is 3600mAh, and it is the thinnest in the industry. It does not support wireless charging, but Huang Zhang believes that the current contact wireless charging doesn’t have a big practical significance.

We are talking about the new-gen flagship. So it’s quite reasonable to learn the Meizu 16s will sport the Sony IMX586 48MP camera. Plus, it will support OIS that the Xiaomi Mi 9 does not have. Of course, it will come with NFC support.

Previously, Huang Zhang revealed that the Meizu 16s will be mass-produced in March and released in April/May. It will cost higher in comparison to the Meizu 16. The price will be more than 3300 yuan ($491), slightly higher than the Xiaomi Mi 9.

Previous Apple no longer ranked as world's most innovative company, drops down to 17th place