As the first product of the independent Redmi brand, the company has poured a lot of effort into the Redmi Note 7. It shoulders the responsibility of educating customers with cost-effectiveness, and also, it embodies how Xiaomi is going to compete with Internet brands such as Honor.

The Redmi Note 7 is codenamed ‘Little King Kong’. After the launch of this handset, Xiaomi officially introduced a few durability tests to showcase the strength of the phone. Moreover, it comes with the industry’s first 18-month warranty, which simply means it is quite a solid phone and will serve you longer than others.

Unfortunately, the Redmi Note 7 is not perfect. Yesterday, we were talking about the video, which showed the weak part of the phone’s plastic middle frame. It means the Redmi Note 7 can easily bend and damage the back as well as the display.

As for today, we are going to introduce three tests that show what you should avoid from if owning the Redmi Note 7.

On the screen side, the Redmi Note 7 uses the Corning Gorilla Glass 5 with a hardness of 6 Mohs. If you use a sharp object with a hardness of 7 Mohs to scratch, the screen scratches will be obvious. In this sense, a few scratches were targeted by a knife that are clearly seen in the picture. In fairness, we should say with the exception of sapphire glass, no material below 7 Mohs can resist. 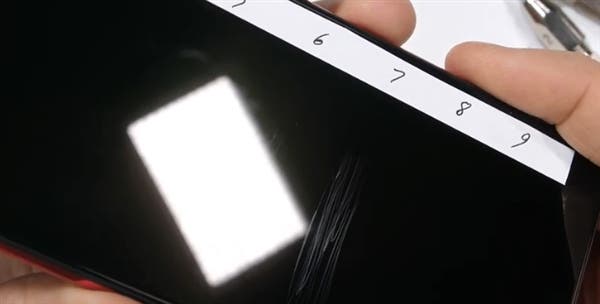 In the same test, a knife was used to check the material used for the middle frame. The latter, the power button, the earpiece, and other parts are made of plastic. Thus, they can be scratched as well. Another awkward thing, the top earpiece is glued up, and the knife can be used to smash the mesh.

The scratch test on the back proves that the camera, flash, and fingerprint recognition module are all covered with glass.

The LCD stayed black for 9 seconds, but after removing the lighter, it quickly recovered. 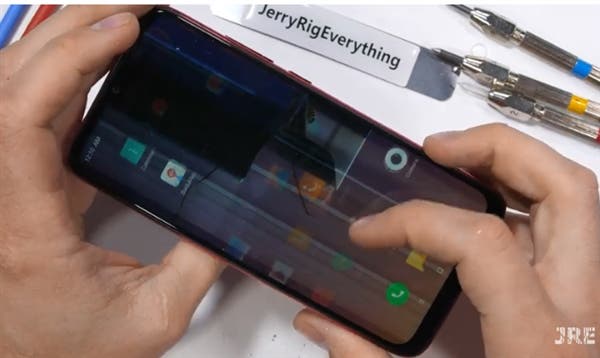 As we said, the Redmi Note 7 is easy to bend. The weak area is between the power button and the SIM card slot.