It is no longer news that the US government added Huawei to its “list of entities”. In response to the government request, American company, Google, has suspended some business dealings with Huawei. Google China responded that it is complying with the order and reviewing its impact. Huawei officially responded quickly, emphasizing that Android as a smartphone operating system has always been open source, and Huawei as an important participant has made a very important contribution to the development and growth of Android.

Huawei’s products, including those from its Honor sub-brand (smartphones and tablets, products and services) are not affected in the Chinese market, so consumers can use and buy with confidence. Some sources also believe that Huawei can only use the public version of Android in the future, and cannot access Google’s proprietary applications and services, which may greatly affect its impact in foreign markets. 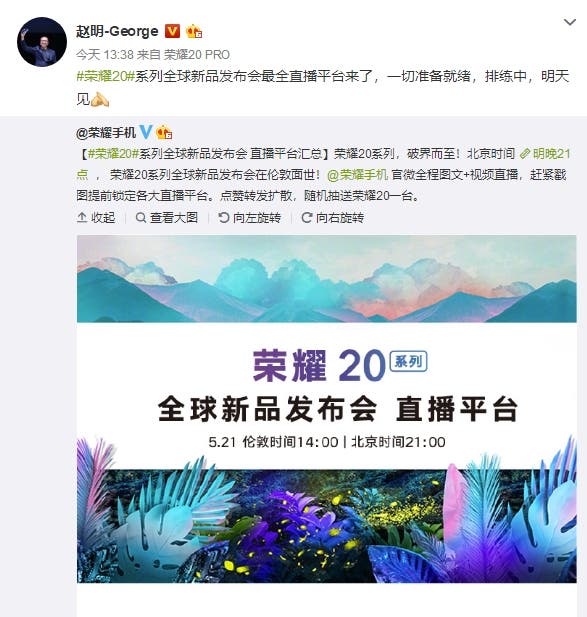 However, on the evening of May 21 at 21 o’clock, Honor will host the Honor 20 series launch conference in London, England. The company said that the development of the Global version progressed smoothly without US restrictions. Honor’s move is undoubtedly echoing Huawei’s response with action, and it proves that whether it is Huawei or Honor, the company is poised to move forward at home or abroad.

It is worth mentioning that as early as March of this year, Yu Chengdong revealed in an interview with German media that Huawei has already prepared its own operating system. Once it happens (US ban, which has eventually happened), it will be impossible to use these (Google and Microsoft) operating systems. We will be ready to start the B plan. Although Huawei sounds confident that it will pull through these trying times, its CEO has admitted that the company’s growth may slow down by about 20% as a result of the US ban but this will be only temporary and it will definitely bounce back.