Back in May, Realme launched its mid-range flagship smartphone called Realme X with notch-less display and pop-up selfie camera mechanism. The top variant of the device features an 8GB RAM and 128GB onboard memory. Today, the Chinese smartphone maker has now added yet another storage variant to the lineup. This time the new variant will come with an 8GB of RAM but with an increased 256GB of internal storage. Here is everything you need to know about the newly launched variant of Realme X. 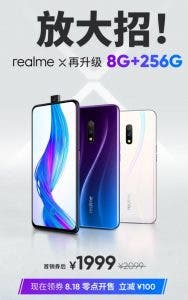 Realme has launched the top-end variant of the device in China today. As of now, there is no word whether the new variant will hit other markets or not. As per the official announcement, the new storage variant will be up for grabs starting from August 18 in the company’s homeland. The device is already up for pre-orders via the company’s official store, Jingdong Mall, Tmall and Suning. Coming to the pricing, Realme X 256GB is originally priced at CNY 2,099 (roughly USD 297). As a part of the launch offer, early buyers can get the device with a limited discount for a price tag of CNY 1,999 (roughly USD 283).

Since this is a limited period offer, you might want to get your hands on the device at the discounted price if you’re planning to buy one. There is no information on the offers timeline meaning the offer might not last that long at all or vice versa. Additionally, you can also go for the 128GB variant which is up for grabs for a discounted price of CNY 1,599 (roughly USD 226). 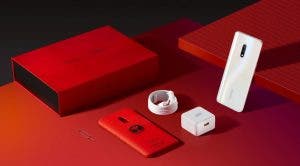 To recall, Realme X features 6.53-inch AMOLED panel having a resolution of 1080×2340 pixels, 394 PPI density and an aspect ratio of 19.5:9. Under the hood, the smartphone is powered by a Snapdragon 710 chipset coupled with up to 8GB of RAM and up to 256GB of internal storage. For imaging, the device is equipped with a dual rear camera module consisting of a 48MP primary sensor and a 5MP depth sensor. For selfies, the device makes use of the pop-up camera mechanism housing a 16MP sensor with an aperture of f/2.0.

All of these is fueled by a massive 3,765mAh battery packed inside with support of 20W VOOC fast charging. The device runs on the latest Android operating system i.e. Android Pie based on the company’s own ColorOS 6 skin. Other specifications include Gorilla Glass 5, Dolby Atmos, under-display fingerprint sensor, Bluetooth 5.0 and GPS. The device is available in two colour options namely Steam White and Punk Blue.

Previous Google to launch Nest Hub in India Next Week, to be priced at Rs 8,999