Yesterday, Xiaomi officially announced the Redmi 8 series is in works and will hit the market soon. Recently, Redmi brand manager Lu Weibing issued a statement through his Weibo channel that the upcoming models will support QC3.0 fast charge. As you know, the charging power of this option is up to 18W.

Also Read: Redmi 8 Appears On A Video Before Its Official Presentation

Lu Weibing said that due to the QC3.0 fast charging technology and the maximum 18W charging power, the Redmi 8 has the ability to ‘fully charge in half an hour’. Thus, the large capacity batteries of low-end smartphones are joining the league of fast charging. Apart from this, with the launch of this series, this brand fully enters the 18W + fast charge era. 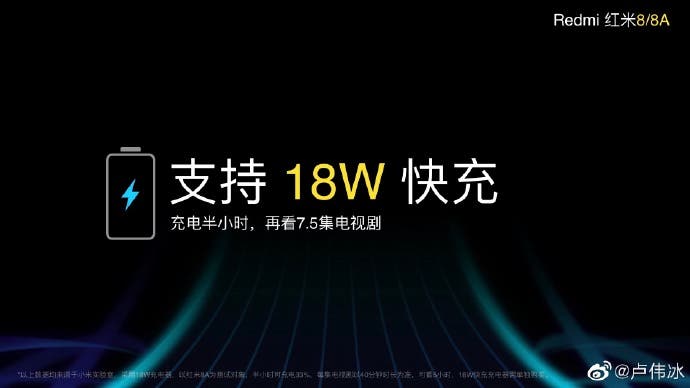 According to the leaked information, the phone will have dimensions of 156.33 × 75.40 × 9.40mm and weighs 188g. It uses a 6.22-inch 1520×720 resolution waterdrop screen and is equipped with a Qualcomm Snapdragon 439 processor. The memory has a 4GB capacity, while there is 64GB native storage, which can be expanded via the microSD card slot.

There is a 5000mAh battery under the hood. The phone also retains the 3.5mm headphone jack. The Redmi 8 runs on the Android UI-based MIUI10 operating system. (At least, we have been thinking so.)

As for the photographing, this series handsets use an 8-megapixel front camera, and a rear 12-

There is currently no information on the price of the Redmi 8/8A. Everything will be uncovered on October 14. So stay tuned.

Next Redmi 8A To Come In Three Color Options of Blue, Black, and Orange