Back in September, Huawei introduced the world’s first Bluetooth 5.1 and Bluetooth 5.1 LE chipset dubbed Kirin A1. The Kirin A1 chip is currently running on various brand’s products such as Freebuds 3 and Watch GT 2. The all-new chipset will work for both wearables such as smartwatches as well as wireless audio equipment. Well, the brand is finally bringing the new chipset to the Indian market in the coming days. With this new chipset, the Chinese smartphone maker will be able to compete with the likes of Samsung, Qualcomm, and Apple in the accessories department.

Huawei Kirin A1 Chipset to Launch in India Soon 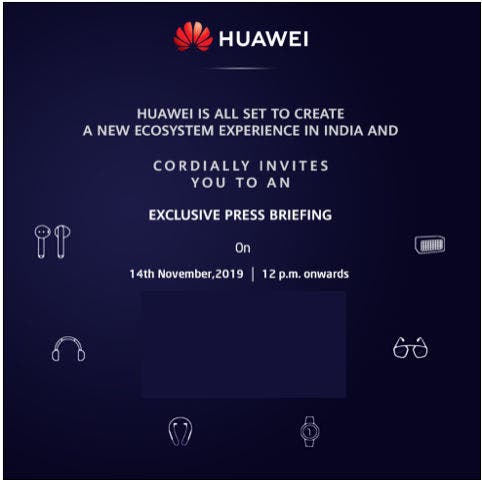 The smartphone maker recently started sending out the press invites in India for its upcoming event. The unveiling event is scheduled for November 14 which is right around the corner. The media invite reads “a new ecosystem experience in India” suggesting the launch of Kirin A1 chipset. Solidifying that, a reliable source has also tipped 91Mobiles revealing the exclusive briefing on the chipset. Furthermore, the press invite features audio equipment, smartwatches, smart glasses, and speakers. This suggests that the chipset will power each of the products offering an entire Huawei ecosystem to its consumer.

Talking about the chipset, Kirin A1 features Bluetooth processing unit and audio in a compact size of 4.3mm*4.4mm. Another interesting feature is the integration of an AI self-developed dual-channel synchronous transmission technology. This solves the earphones’ disconnection problem caused by signal interference. The chipset also makes use of the unique BT-UHD Ultra HD Bluetooth codec technology. This new tech brings a maximum transmission bandwidth of up to 6.5 Mbps meaning 2.8 times the transmission speed of Bluetooth standard (2.1 Mbps).

As mentioned earlier, Huawei’s latest FreeBuds 3 and Watch GT 2 runs on the Kirin A1 chipset under the hood. Well, both the products will also hit the Indian market later this month. FreeBuds 3 is going to be the company’s first truly wireless earbuds for the Indian market. Furthermore, Watch GT 2 is going to succeed the current first-gen smartwatch available in the country.