A few hours back, Vivo announced the impending launch date of the Vivo X30 as December 16th. Apart from the launch date, the company has also confirmed it to be powered by the all-new Samsung Exynos 980 becoming the company’s first dual-mode 5G smartphone. And now a couple of hours later, the phone has been spotted on Geekbench giving us some insights into its performance.

According to the Geekbench listing, the upcoming Vivo X30 will bear the model number ‘Vivo V1938CT’ and will run Android 9 Pie out of the box, even though Android 10 has been out for a few months now. The listing also confirms the Exynos 980 with its codename ‘erd9630’ which will be coupled with 8GB RAM. As far as scores are concerned, the Vivo X30 tops at 3095 and 7379 points for single-core and multi-core respectively. The scores clearly say the Exynos 980 SoC will perform slightly better than Qualcomm’s Snapdragon 730. 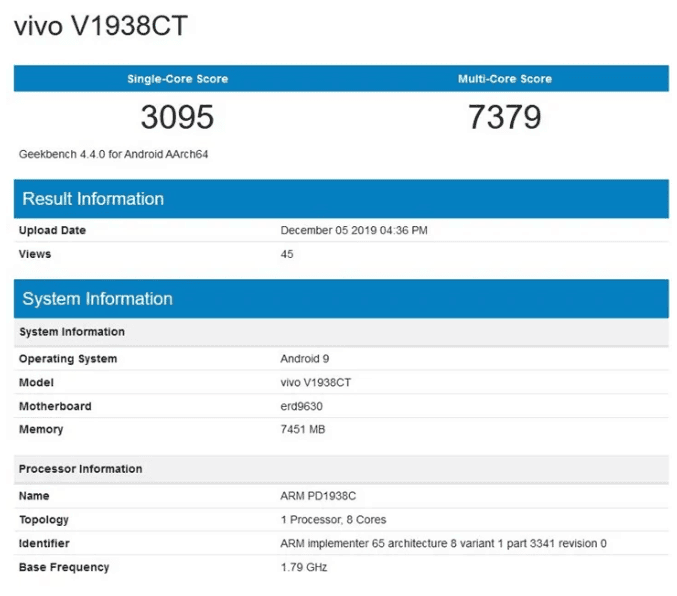 Other specifications of the Vivo X30 are unknown at the moment except for the fact it will arrive with support for dual-band 5G and thus it will work on both standalone(SA) and non-standalone(NSA) 5G networks. Additionally, the phone is tipped to run a new custom skin named JoviOS, leaving the brand’s old FunTouch OS behind.

Vivo X30 Invites Sent Out – Is that a Telescope?

Vivo X30 Shows Its Beauty in these First Official Renders