Huawei has already managed to launch many versions of its MateBook series laptops. Among them, you can even find a Linux variant. As you see, the manufacturer is doing its best to make the MateBook line notebooks available for all groups of users. So it’s quite logical the company is working on the new version of this laptop series that should be packed with the tenth generation of Intel Core chips. Today, one of the users showcased the leaked parameters of the upcoming Huawei MateBook 13/14 2020. 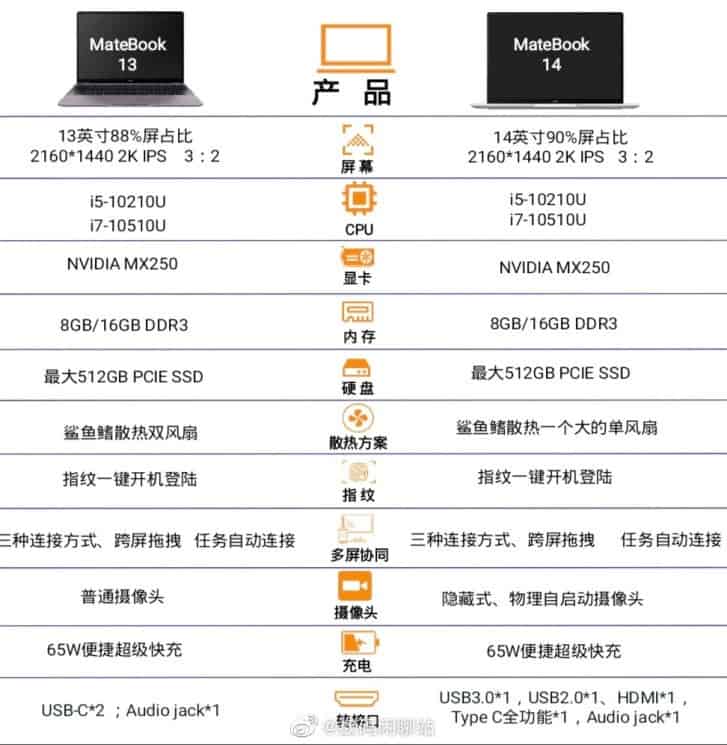 As we can see in the specs table, the Huawei MateBook 13/14 uses a 2K resolution IPS full-screen. At the same time, the display will have a 100% sRGB color gamut coverage and a 3:2 screen ratio. Also, the whole body is made of metal. So we are dealing with a top-end laptop that will be competing with the market leaders.

In terms of configuration, the Huawei MateBook 13/14 will be equipped with the Intel i5-10210U and i7-10510U processor paired with 8GB/16GB memory and up to 512GB PCIE SSD. It will also use a MX250 graphics card. Among other attractive features, we can mention support for fingerprint one-click boot login, 65W portable super-fast charge, and shark fin cooling.

At last, when it comes to the interfaces, the new MateBook seems to have no problems. The MateBook 13 will come with two USB-C ports, while the Huawei MateBook 14 will be equipped with a USB 3.0 interface, a USB 2.0 interface, an HDMI interface, and a Type-C full-featured interface.

Next Orange Chooses Nokia and Ericsson to Deploy 5G Networks