Huawei is now working on yet another new smartphone that seems to carry mid-range specifications inside. Well, the phone comes with model number MED-AL00. This is not the first time we’re hearing about the phone. A similar phone with the same model number appeared on the TENAA listing.  As of now, the moniker of the device remains unknown. We should wait for more information about that. 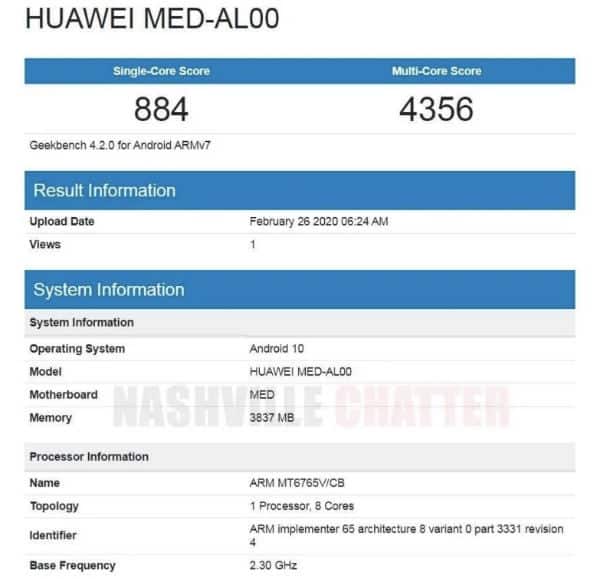 Coming to the GeekBench listing, the all-new unknown Huawei device carries the model number MED-AL00. It is spotted running the MediaTek MT7675V chipset which is nothing but the Helio P35 SoC. The processor is paired with 4GB of RAM while there is no information on the onboard memory. On the software front, we’re looking at the latest Android 10 operating system.

Talking about the benchmark scores, the device managed to score 884 points in single-core performance. In the multi-core benchmark test, the device received 4356 points. Looking at the previous information, the device will come with a 6.3-inch display with a waterdrop notch housing the selfie camera. It should be powered by a 5,000mAh battery with the support of 10W fast charging technology.

Previous render images reveal that the device has no physical fingerprint sensor on the back. This is quite surprising since every device at this price range does offer a physical sensor on the back. With that said, more information should light up the scenario in the future. Lastly, there is a power and volume button on the right side as expected.

As of now, there is no official information on the launch or availability details of the device. Since it has now appeared on the GeekBench listing, the phone should be near to the official launch. If that’s the case, then we should expect more information to hit our way in the coming days.