We know the Honor 30 series smartphones will be released this month. On April 15, the company will hold an online conference and launch the new-gen flagship handsets. Recently, we learned that the original model will debut the Kirin 985 pseudo-flagship chip. But we also know there will be a higher variant. Today, we got a GeekBench screenshot, showing the benchmark scores of the Honor 30 Pro. Also, we can see that it will sport the Kirin 990 5G SoC.

In the Geekbench 4.2 database, a new model of Huawei is market with a model number of EBG-AN00. The corresponding model is codenamed ‘Edinburgh’. Taking into consideration all the previous leaks, there is every reason to think we are dealing with the upcoming Honor 30 Pro. 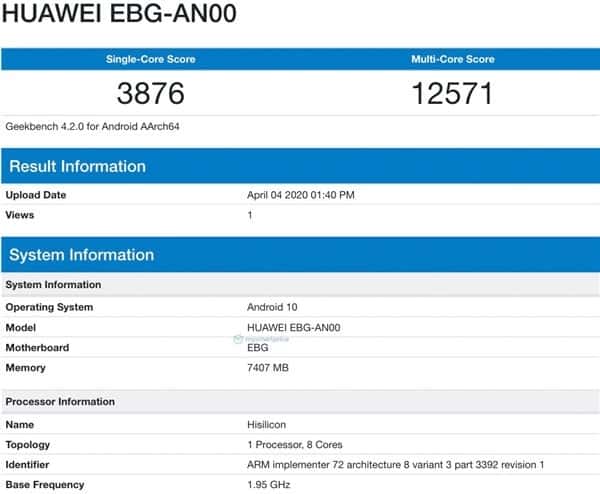 In the screenshot, we can the Honor 30 Pro has a single-core 3876 and multi-core 12571 running scores. They are basically in line with the performance of the Kirin 990 5G. In addition, the Honor 30 Pro tested at the GeekBench is also equipped with an 8GB RAM and runs on the Android 10 system.

Well, seems we have figured out what chips will be under the hood. But this series is also known for another feature. The phones should come with a new Sony customized outsole sensor, reaching 1/1.3 inches, with a single-pixel area of ​​1.2μm. This is the largest in the industry. At last, our protagonist will sport a 90Hz refresh-rate screen.

As said, the Honor 30 will be uncovered on April 15. But we are sure before that, we will learn about more features.

Previous COVID-19 and 5G: a combination ready to "kill" the smartphone industry?

Next OPPO's First Smart Speaker On The Way: Coming Tomorrow