Earlier today, Samsung updated its Android Security updates timeline for numerous smartphones including the Galaxy S8 and S8 Plus. The chaebol follows two different timelines for its security updates namely Monthly and Quarterly. Well, the three-year-old flagship Galaxy S8 duo has now finally been moved from the former to the latter.

This means that the lineup will now receive bundled updates every three months instead of the current monthly schedule. To recall, the Galaxy S8 and S8 Plus were launched way back in April 2017. Both the devices have already received three major Android updates in line with the company’s update program for flagship phones. Initially, the S8 was launched with Android 7.0 Nougat and now runs on the Android 9.0 Pie with One UI skin on top.

Last month, Samsung ended the support for its 2016’s Galaxy S7 lineup. For those who’re unaware, the lineup received two years of monthly updates and another two years of quarterly updates. With that said, it seems like S8 duo still has one more year left for its update timeline to see an end.

Samsung Galaxy S8 Duo Moved to Quarterly Update: List of All the Other Models/Devices

Apart from S8 lineup, Samsung has also moved numerous devices from monthly to the quarter schedule. You can find the list of complete devices mentioned down below. 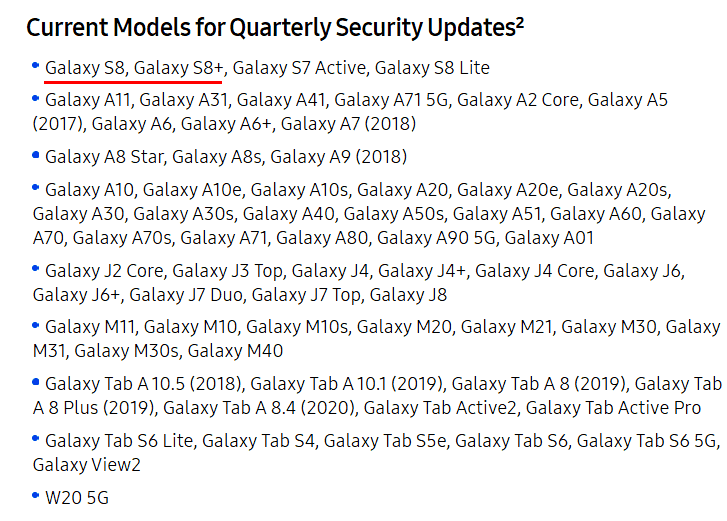 On a related note, Samsung Galaxy S8 duo will not receive the latest Android 10 operating system. Speaking of updates, the new One UI 2.1 might finally make its way to the Galaxy S9 and S9 Plus smartphones. Apart from all these, Samsung has also terminated its Game Tuner service which was designed to improve the gaming experience on Galaxy devices. The app comes packed with numerous features such as overclocking, FPS tweaking, increasing resolution and more. Although the app is now removed, Android Oreo users would still be able to use it.