After the P-Series and the Nova-Series, it is time for Huawei to update its range of Enjoy Series smartphones. It is estimated that there will be a number of smartphones that Huawei launches in this series. And one of them is Enjoy 20 Plus, which its leaks are starting to appear online.

The Huawei Enjoy 20 Plus leak came from a tipster from China which revealed a lot of information regarding the specifications of this smartphone.

According to reports, the Huawei Enjoy 20 Plus smartphone is said to be arriving powered by MediaTek’s 5G Dimensity 800 processor. This is the same SoC used by the OPPO A92s smartphone.

Huawei has relied on a processor from MediaTek several times in its line of smartphones. So this is not so surprising. But it is quite interesting to see Huawei preferring to use a 5G Dimensity 800 processor given that currently, Huawei has a Kirin 820 5G chipset. It is also a middle-class 5G processor such as Dimensity 800 which debuted on the Honor 30S smartphone.

In addition, the leak also revealed other specifications of the Huawei Enjoy 20 Plus smartphone. One of them says that this phone will have an LCD screen that offers a resolution of 2400 x 1080 pixels, and supports a 60Hz refresh rate. 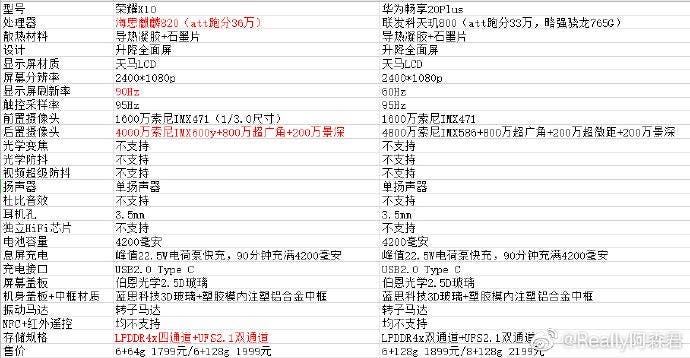 Unfortunately, the screen size and design of Enjoy 20 Plus are still unknown. Last year the Huawei Enjoy 10 Plus smartphone was launched with a pop-up camera. It’s not yet known whether the successor will use the same design or something else.

What’s clear is that the Huawei Enjoy 20 Plus smartphone will have a 16 megapixel Sony IMX471 selfie camera. While on the back, we might see this phone with quad-camera sensors.

The four cameras consist of a 48-megapixel Sony IMX586 main sensor; In addition to an 8-megapixel ultra-wide, and a pair of 2MP sensors.

Completing the specifications, there will be a choice of 6GB or 8GB LPDDR4X RAM with UFS 2.1 128GB storage. There is also a 4,200mAh battery equipped with 22.5W fast charge support.

When Huawei will launch its new smartphone is still unknown. But when it becomes official, Enjoy 20 Plus is expected to arrive with a price tag starting at 1,899 Yuan (around $269).