Chinese manufacturing giant, Huawei, and the U.S. government have been at loggerheads over multiple issues. While the U.S. has reasons to believe that Huawei is working for the Chinese government, the company vehemently denies the claim. The result of this is that Huawei can no longer do business with American companies. In fact, it can not do business with non-American companies that use American technology.

However, a recent research report on Bloomberg claims that the U.S. will pay Huawei if it must develop 5G. The new study shows that Huawei has the most patents in 5G technology. This means that even if the US government takes action to try to remove it from the supply chain, Huawei will still get Patent fees. This is not the first report to detail Huawei’s massive contribution to 5G development and its patents. In fact, as of May last year, Huawei’s 5G essential patents surpasses that of all American companies put together.

The U.S. has no choice, it has to pay Huawei

A study by two research companies identified the inventions most closely associated with the 5G standards. This study found that six companies account for more than 80% of the patents. These companies include Huawei, Samsung Electronics, LG Electronics, Nokia, Ericsson, and Qualcomm. Qualcomm is the only American company in the list.

Huawei’s official Twitter recently quoted Bloomberg as saying, “Need evidence that nationalism does not work in the tech industry? 80% of patents on #5G tech are owned by 6 firms – Huawei is the leader and only 1 is American. So? Despite efforts to cut #Huawei out of the supply chain, the U.S. will continue paying it for IP.  #HuaweiFacts” 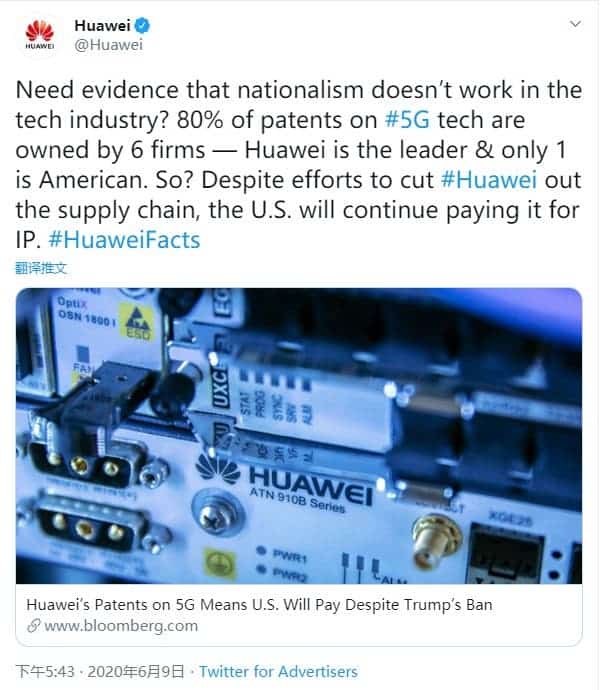 This will be a very difficult fact for President Trump and the U.S. government to admit. Since the beginning of last year, President Trump has been trying so hard to cripple Huawei. In fact, the U.S. latest policies show that the American government is losing its influence. It is obviously trying too hard.

According to Deepak Syal, director of GreyB Services Pte., a technology research firm that conducted the study with software firm Amplified AI Inc, “Even if they hire some other company to build the 5G infrastructure, they still have to pay the Chinese company because of the intellectual contribution to develop the technology,”

Paying and getting paid for IP (Intellectual Property) is an integral part of the technology industry.  In a recent court dispute with an American carrier, Verizon, Huawei has collected more than $1.4 billion in licensing revenue and has paid some $6 billion to other companies