WhatsApp has reportedly started testing Animated stickers. Just like the earlier update, the new feature is limited to the beta version. It’s coming and might see the light of the day sooner than we expect.

First spotted by WABetainfo, the company has begun testing it on beta version for Android (v2.20.194.7) and iOS (v2.20.70.26). Users need to enrol in the beta program on their respective app stores and be on the versions mentioned above to get the feature.

Animated Stickers: What can we expect?

Since the company is reported to roll out this feature to selected users, few users might not see the feature inside the app despite being on the latest beta. The other two parts include the ability to import third-party stickers and download a few from the WhatsApp store.

While the other two features might take time to trickle down to the beta, stable versions will have to wait for a while to get them. Further, the beta doesn’t have sticker looping. This means users who get it will have to tap on it every time to play the animation. Also, there is no info if WhatsApp will be looping the animations in future versions. 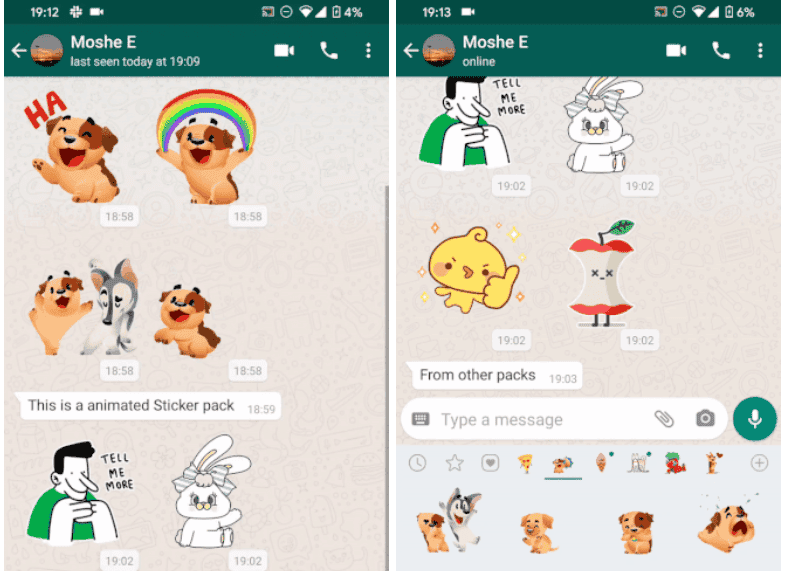 Reports say that only a few users were able to send animated stickers. And if the receiver has the first part enabled on his beta, he might be able to read, save, and forward them on receiving it from a creator. Further, AndroidPolice has reported that the new beta version has five default animated sticker packs. Those are Playful Piyomaru, Rico’s Sweet Life, Moody Foodies, Chummy Chum Chums, and Bright Days.

That being said, sending animated stickers seems to be rare and limited to a few creators as of yet. Hence, if you are on the beta version and receive one, consider yourself lucky.

Others can either download the APK externally and try their luck. Alternatively, you could just wait it out. The messenger is working to get third-party developers for a wider rollout and avoid bugs like the one that was recently found on its invitation codes.