A month after revealing the Helio G85 SoC, Mediatek is back with even more budget G35 and G25 gaming-centric processors. The Taiwanese firm claims the MediaTek Helio G35 has faster performance, brilliant graphics and enhanced power efficiency.

The Taiwanese fabless semiconductor company, in a press release, iterated the features that the SoCs bring with them. Built on the 12nm FinFET process, Mediatek says the new entry-level processors have features like the HyperEngine Gaming technology to improve frame rates in gaming while not compromising on battery life.

The company says HyperEngine intelligently manages resources for smoother performance by dynamically managing the CPU, GPU and memory simultaneously. When the Wi-Fi signal is weak, the technology intelligently triggers Wi-Fi & LTE concurrency within milliseconds, to ensure a lag-free connection.

According to them, the HyperEngine also lets users defer calls, while in a game, for hassle-free gaming. 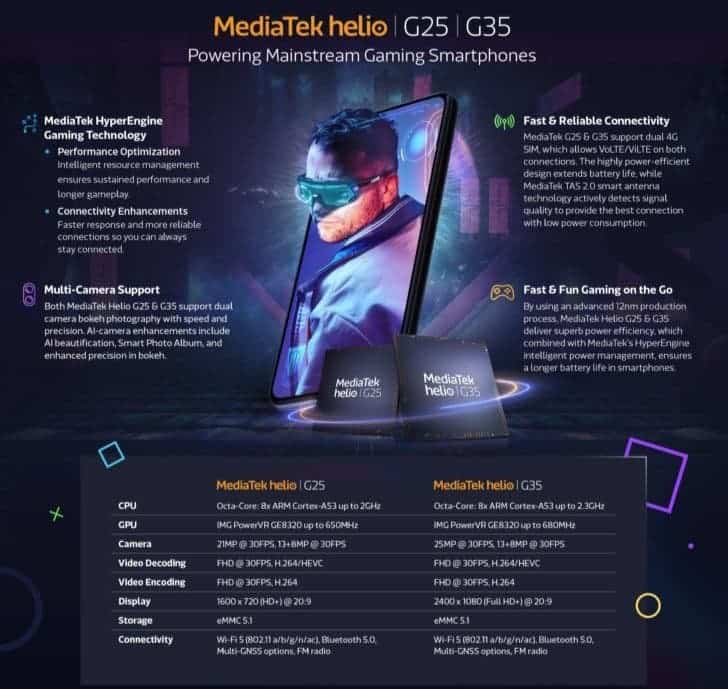 As the name suggests, Helio G35 SoC is the powerful of the two. It has all the eight cores based on ARM’s Cortex A53 clocked at 2.3GHz. The IMG PowerVR GE8320 GPU with a maximum frequency of 680MHz is capable of supporting an FHD+ display with a resolution of 2400×1080 pixels.

As for the optics, the SoC supports a dual-camera setup with a maximum of 13MP for each sensor. Selfies can be hosted up to 25MP shooters with frame rates of 30fps.

Slightly lowered clocked G25 is built on the same Cortex A53 cores with a difference being all the cores operating at a max frequency of 2.0GHz. Powered by the same PowerVR GE8320 GPU, Mediatek has clocked it slightly lower at 650MHz and supports only HD+ displays up to 1600×720 resolution.

Contrary to its sibling, the G25 supports dual-cameras only up to 13MP and 8MP combination. Selfie shooters can be extended up to 21MP unlike the 25MP on the former. However, the camera sensors can record up to 30fps.

Storage variants of both G35 and G25 can be 4/6GB of LPDDR3/4x RAM and eMMC 5.1 storage. These SoCs are expected to arrive in budget smartphones and Redmi’s 9 series and Realme’s C11 have already adopted them commercially.