According to the latest news disclosed by Huawei’s consumer business CEO Yu Chengdong in the personal video of the HDC 2020 conference, ‘Everything will come as scheduled’. This simply indicates that the new Huawei Mate 40 series, the representative flagship of Huawei in the second half of this year, is coming soon. It is worth noting that in previous years’ plans, there is also a distinctive folding screen flagship from the Huawei Mate X series. Based on the rumors, leaks, and the latest patent sketches, LetsGoDigital has created the renders of the upcoming Huawei Mate X2. 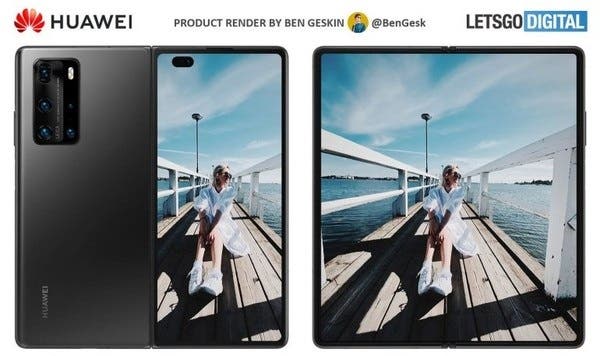 As the source claims, the new Huawei Mate X2 folding screen phone has dual internal and external screens. The internal screen continues the full-screen design style of the first-gen Huawei Mate X. The previous design of the outward-folding foldable screen has switched to a book-like internal foldable flexible screen solution. The surrounding borders are very narrow and equal in width. And the screen-to-body ratio is expected to be quite good. On the back of the phone, the phone uses a design concept similar to the Huawei P40 series. Thus, it comes with a rear matrix camera module.

In other aspects, according to previously leaked news, the new Huawei Mate X2 will use the same 8-inch foldable display as the Mate X and Xs. Also, we heard it will support laptop mode as well as split-screen function. So users can use a keyboard and turn it into a full-featured laptop.

The new Kirin 9000 series chip was cut off by TSMC due to the US ban. So it will be a big question whether it can have inventory for the Huawei Mate X2. In addition, the machine’s camera will be upgraded to a front dual-camera system and a rear quad camera module.